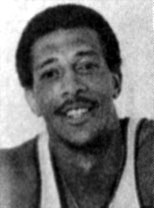 Johnny Harold "Sky" High (born April 25, 1957 in Birmingham; died July 13, 1987 in Phoenix, Arizona) was a professional basketball player for the Phoenix Suns of the NBA. He spent four seasons with Phoenix and missed only one game in his first three years.

High attended high school at Jones Valley High School. He went on to play at Lawson State Community College and University of Nevada and was selected by Phoenix in the second round of the 1979 NBA Draft. During an NBA game against Washington on January 28, 1981, High recorded nine steals, setting a team record that stood until Kevin Johnson recorded 10 in a game in December 1993.

High died in an early-morning automobile accident when his car plowed into a utility pole in Phoenix, Arizona. He was a key witness in a pending drug case which was dismissed following his death.