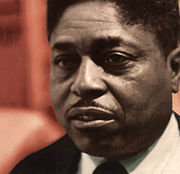 Born in Tennessee, Shines played in the Mississippi Delta with blues legends like Robert Johnson before following them to Chicago, Illinois and helping create the heyday of Chicago blues. He recorded in the 1940s and 1950s and traveled the country with Robert Johnson, who greatly influenced his slide guitar style.

Shines moved to Holt, Alabama, in Tuscaloosa County, in 1969. He continued to play the international blues circuit. When a University of Alabama student, Natalie Mattson, learned that he was living in the area, she invited him to play at a coffee house, known as the "Down Under," that she ran on campus. Shines played on several occasions, and also brought his friend, blues artist Mississippi Fred McDowell to appear with him at Down Under. These were some of his earliest appearances in Alabama after the move to Holt.

He continued to perform in the area, including two appearances at City Stages. 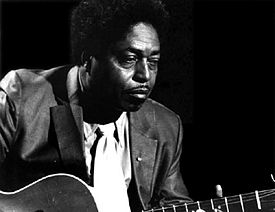 Shines was nominated for a Grammy Award in 1980 for "Hangin' On," a recording with Robert (Junior) Lockwood. The same year, a severe stroke limited his ability to play guitar, but he retained what the New York Times called his "searing, shouter-style voice."

On March 18, 1992, Shines was admitted to the DCH Regional Medical Center in Tuscaloosa with hardened arteries. He had his left leg amputated and remained hospitalized until his death on April 21. Shines died just shy of his 76th birthday on April 25, 1992, which had already been declared "Johnny Shines Day" by Tuscaloosa Mayor Al DuPont. He was survived by his wife, Candy, and daughter, Caroline, whom he had coached in blues singing. Funeral services were held at Morning Star Baptist Church in Holt and he was buried at Cedar Oak Memorial Park south of Tuscaloosa.

He was inducted into the Blues Hall of Fame in 1992.

The street where he lived in Holt was renamed "Johnny Shines Street" in 2009.

His influence lived on in Alabama blues artists, Kent Duchaine and Debbie Bond. Shines and Duchaine performed together on “Roots Of Rhythm And Blues: A tribute To Robert Johnson Era” recorded by Sony/Columbia and also nominated for a Grammy.