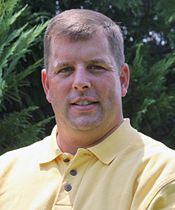 Jon Graham (born 1970) is the owner of Graham Automotive and the current mayor of Calera.

Graham, a Calera High School and University of Montevallo graduate, was elected Calera's mayor during the 2008 elections but was unable to take office until 2009. During the 2008 election, incumbent Calera mayor Roy George did not run for re-election. Graham and Bobby Joe Phillips advanced to a runoff. In the runoff, Graham beat Phillips 925 to 618.

Graham owns Graham Automotive and J. G. Properties. He and his wife Shana have three children.