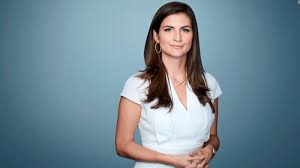 Collins graduated from Prattville High School and enrolled at the University of Alabama. While there she changed her major from chemistry to journalism and political science. She completed her bachelor's degree in 2014 and began working as a freelance writer and blogger. She was hired by The Daily Caller as an entertainment reporter that June, and was assigned to cover the presidential campaign in 2016. She was subsequently assigned to cover the White House in January 2017. CNN hired her for the same beat in June of that year.

In July 2018 Collins was working as a pool reporter at a photo-op with President Trump and European Commission president Jean-Claude Juncker. She asked Trump about recent news regarding Trump's former attorney Michael Cohen and about Russian president Vladimir Putin. Trump ignored the questions and Collins was later told she would be barred from the subsequent press availability in the Rose Garden. Collins, CNN, and the White House Press Association all objected to the actions of the White House in violation of the First Amendment's protection of the free press.