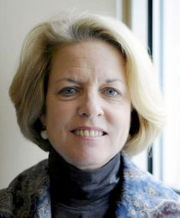 Kate Nielsen (born c. 1954) was president of the Community Foundation of Greater Birmingham from 2000 through 2013. Before succeeding Mimi Tynes as president, she joined the organization as its first development officer in 1995.

Nielsen graduated from Wheaton College in Massachusetts and worked for AmSouth Bank and the Birmingham YWCA. She is married to Coca-Cola Bottling Company United president and CEO Claude Nielsen.

Nielsen is an alumnus of both Leadership Birmingham and Leadership Alabama. She was inducted into the Birmingham Business Hall of Fame in 2019.