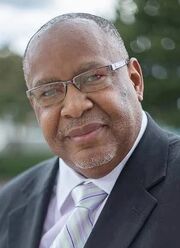 Kevin Paul Turner (born c. 1962 in Peoria, Illinois; died March 1, 2021) was a Christian minister and the long-time director of the UAB Gospel Choir.

Turner was the son of Ervin Turner, a district elder in the Pentecostal Assemblies of the World denomination. He assumed the baton of UAB's Gospel Choir in 1994 and retired in 2017. Outside of UAB, he participated in the music ministries at 16th Street Baptist Church, Sixth Avenue Baptist Church, Faith Apostolic Church, and the Alabama District Council of Pentecostal Assemblies of the World. In addition to his work in the Department of Music, he taught classes in Gospel music history in UAB's African American Studies Program.

As a songwriter, Turner is credited with creating the "I Like It" theme for the launch of WABM-TV (Channel 68). A recording of his "Everybody Ought to Know (Who Jesus Is)" by the UAB Choir went up on the Canadian gospel charts in 1997. His 2012 song, "You Don't Know What I Could Have Been" , performed by UAB Gospel Choir, is a memorial to the victims of the 1963 bombing of 16th Street Baptist Church.

Turner was previously employed by the American Red Cross and served as a loaned executive for the United Way of Central Alabama's United Appeal campaigns.

Turner completed a bachelor's degree in pastoral theology from Andersonville Theological Seminary in 2006, and served as a suffragen bishop in the Pentecostal Assemblies of the World denomination. He was the founder of Holy Harvest Ministries and of Pentecostal Fellowship Churches, Inc.. On July 14, 2013 he took over as acting pastor of Emmanuel Temple Holiness Church No. 2.

Turner was married to the former Yolanda Gail Core, and had six children.

Turner retired from UAB in 2017. He was later badly injured in a car accident and suffered two heart attacks in the hospital. While there, he was also diagnosed with multiple myeloma, a cancer which has spread from his bone marrow to his blood. Rehabilitation and physical therapy allowed him to regain some movement. He died from complications related to the cancer in 2021.