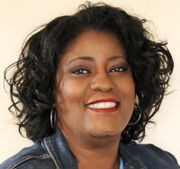 Jeanty moved to Birmingham from Boynton Beach, Florida in 2009. She worked as a neighborhood liaison in Kim Rafferty's City Council office from 2009 to 2011. She joined the board of directors for the East Lake Arts District in 2012 and stepped in as interim director at Ruffner Mountain in October 2013 following the departure of Robbie Fearn. From 2014 to 2016 she served a two year term as president of the South East Lake Neighborhood Association and of the Roebuck Community. In 2015 she was also elected president of the East Lake Merchants Association.

Jeanty announced her candidacy for City Council at a volunteer service event at the Brown Springs EcoScape in March 2017. Her platform, publicized as "ACT2017", emphasizes a commitment to accountability, credibility and transparency. She pledges to publish all budget outlays from District 2 on a monthly basis.

Jeanty and her husband, Peter, have one daughter, Taylor. They attend East Lake United Methodist Church.