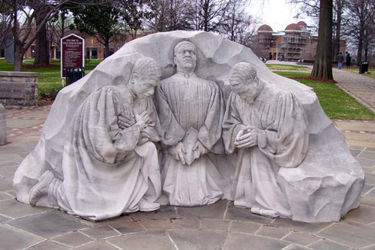 Photograph of the statue in January 2007 by André Natta

"Three Ministers Kneeling" is a limestone sculpture by Maryland-based artist Raymond Kaskey, which was erected at Kelly Ingram Park in 1992. Three figures are depicted emerging from a boulder which serves as a backdrop to the scene. The figures, clad in robes and shown kneeling in prayer, represent Birmingham's ministers of the Civil Rights Movement.

Specifically, the sculpture depicts the moment on April 7, 1963 (Palm Sunday) when three ministers, John Thomas Porter, Nelson H. Smith and A. D. King, led a group of 2,000 marchers protesting the jailing of movement leaders Martin Luther King Jr, Ralph Abernathy and Fred Shuttlesworth. When they were confronted by Public Safety Commissioner Bull Connor and his police, the three immediately knelt to pray on the sidewalk.

The sculpture was commissioned for the renovated park, transformed into "A Place of Revolution and Reconciliation" to coincide with the opening of the adjacent Birmingham Civil Rights Institute. Mayor Richard Arrington intended for the sculpted figures to literally depict the three ministers in prayer, but Shuttlesworth and Abraham Woods Jr objected, saying that it should be made more generic to include the dozens of other ministers who made sacrifices on behalf of the movement. The change allowed Kaskey, who had been working from photographs of the ministers, to hire age-appropriate models for the kneeling figures. He gave Smith and Porter the original plaster versions of their portrait heads. The finished work was carved into a large block of Alabama limestone.

King had died in 1969 while Smith and Porter lived into retirement (both died in 2006). About a year before Smith died his grandson, Anthony Johnson, began campaigning for an explanatory plaque to be added to the sculpture to honor the three men most directly represented. He concluded that "personality differences" were behind the original disagreement and secured the blessings of both Woods and Shuttlesworth for his proposal. The plaque was unveiled on January 9, 2009.