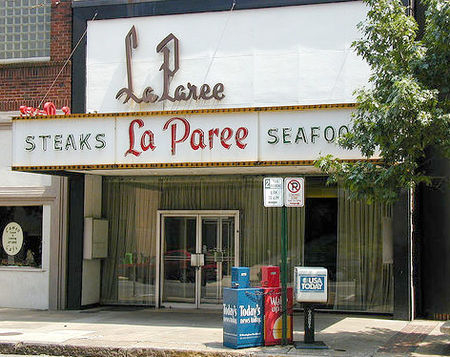 La Paree (sometimes The La Paree) was a steak and seafood restaurant located at 2013 5th Avenue North. It opened in the 1940s and remained in business until December 2003.

In the mid 1940s, the restaurant was operated, possibly under another name, by relatives of Michael Matsos, then recently returned from service with the 15th Air Force in Italy and continuing to serve in the Civil Aeronautics Administration at Atlanta's Municipal Airport. When illness in the family threatened the restaurant, Matsos was granted a discharge to come to Birmingham to help keep it going. In 1948 he and partner-chef Bill Demoes, who also had recruited family members from Greece to staff the kitchen, approached Bank for Savings and Trust president Milton Andrews with a request for a loan to buy the business. Though he had little more than a 7-year-old Chevrolet to his name, Andrews approved the loan. "La Paree Cafe Inc." was incorporated on February 15, 1947, and the restaurant, then known as "La Paree" thrived under their management.

La Paree was known as one of the top downtown restaurants in Birmingham, attracting politicians and business executives to its then dark-paneled dining room alongside office and industrial workers from all over downtown. Signature dishes included shish kebab, pilaf rice and spaghetti with burnt butter. Matsos provided free meals to the doorman at the nearby Tutwiler Hotel to drum up business.

In 1953 Matsos sold his share in the downtown restaurant to Demoes and his family and opened a second "La Paree" in the newly-opened Holiday Inn on Bessemer Super Highway. Soon he changed the name of the motel restaurant to "Michael's". Demoes oversaw a full remodeling of La Paree's restaurant's interior and facade in 1955. The restaurant reopened on September 21.

In September 1981, La Paree was sold to Greg Despinakis. Nick Erben took over the restaurant in 1988 and operated it until the cafe closed, partly due to deterioration of the building, in 2003.

In February 2008 Harbert Realty Services announced plans to demolish the restaurant in order to expand the Mariott Renaissance hotel they were developing in the adjacent Regions Plaza building.