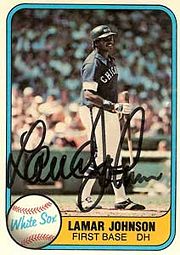 Lamar Johnson, Sr (born September 2, 1950 in Bessemer), was a professional baseball first baseman and designated hitter. Johnson played most of his career with the Chicago White Sox. He was drafted by Chicago on June 7, 1968 in the 3rd round of the 1968 amateur draft, after playing college ball for Lawson State Community College after graduating from Wenonah High School in 1968.

From 1968 to 1975, Johnson played on 10 different minor league teams that were affiliated with the White Sox, including the 1970 Duluth-Superior Dukes. Johnson had a batting average of over .300 in five of his minor league seasons.

Johnson made his major-league debut with the Sox on May 18, 1974. Playing sporadically in the majors during 1974 and 1975, Johnson went to the White Sox permanently in 1976. Johnson played for Chicago until the end of the 1981 season and was granted free agency on November 13. On January 15, 1982, he signed as a Free Agent with the Texas Rangers. After a full season with Texas, he was released on March 31, 1983.

After his release, Johnson stayed in baseball as a minor and major league coach. From 1995 through 2002 he coached for the Milwaukee Brewers and the Kansas City Royals and, in 2003, the Seattle Mariners. Johnson currently lives in Arlington, Texas.