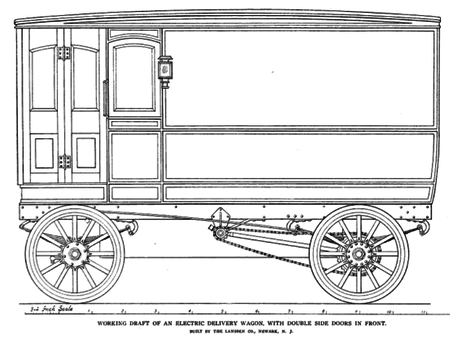 A Lansden electric wagon design from 1911

The Lansden electric wagon was an electrically-powered wheeled vehicle used as a merchandise delivery cart and as a passenger shuttle. It was developed by engineer John Lansden in Birmingham and later developed in partnership with Thomas Edison for use at his phonograph plant in Orange, New Jersey.

After graduating from the Rose Polytechnic Institute in Terre Haute, Indiana, Lansden joined classmate William Little in accepting employment with the Birmingham Electric Manufacturing Company. Lansden developed his first electric carriage in 1901 for the Hillman Hotel, to transport guests on the four and a half-block route to and from Union Station. During development of the design for other businesses, Lansden corresponded with Edison regarding the most effective types of batteries. Edison sent a representative to Birmingham to investigate the carriage and invited Lansden to relocate to New Jersey where they could work together to improve his design.

In 1904 Lansden founded the Lansden Company in Newark and soon filled an order for 145 electric wagons for the Adams Express Company to use in New York and Washington D.C. Over the next seven years the basic design of the Lansden electric wagon changed little. The single motor was attached to the chassis frame, which was secured to the axles with semi-elliptic side springs. The motor connected to a transmission box by three chains, allowing the controller to switch between three or four forward speeds and two reverse speeds under a constant current. Rear drum brake, lamps, horn, bell and odometer were also powered by the battery, which was mounted underneath the chassis and charged from a concentric-type receptacle. The operator had access to a safety switch to disconnect power to the motor and all equipment. The most popular model, the Type 36, was powered by a 3/4 horsepower motor and had an 87-inch wheelbase. Another specialty of the company was high-capacity, low-speed flat-bed wagons used to move goods around shipping docks and factories.

In 1911 Lansden accepted a position with the General Motors Truck Co. of Pontiac, Michigan. His interest was absorbed into GM's Electric Division while his former company continued to make and sell electric trucks and vans from a new plant in Allentown, Pennsylvania which was built in partnership with John Mack's Mac-Carr Company. The Lansden company relocated to Brooklyn, New York in 1914 and then to Danbury, Connecticut after World War I. It continued to use Edison alkaline batteries throughout its life.

General Motors ended its electric production in 1915 and the Lansden Company closed in the early 1920s as gasoline-powered cars became standard.