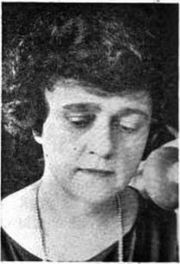 Lewis was the daughter of John Decatur Butt and the former Catherine Joyner Boggs of Augusta, Georgia. She married George Alford Cunningham in 1898 and had one son with him.

On June 27, 1907 she married widower Edward Barrett (1866-1922), a former city editor for the Augusta Chronicle who had purchased Birmingham's Daily State Herald from John Rountree in 1897 and revived the paper's earlier "Age-Herald" name. The couple resided at 3603 Cliff Road. Their son, Edward Barrett Jr (1910-1989) later became dean of the Graduate School of Journalism at Columbia University. They also had a daughter, Kitty.

Lewis Mayer assisted Edward with some of his business duties, and she took over responsibility for managing and publishing the Age-Herald at his death in July 1922. The transition made her, according to Editor and Publisher, "America's first [female] directing head of a metropolitan newspaper." She sold the newspaper to Mobile Register and Mobile News-Item publisher Frederick Thompson with a few months, and married hotel executive Robert Meyer that November.