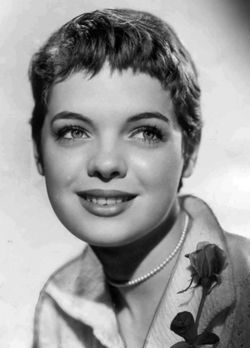 Gentle was a second cousin of actress Tallulah Bankhead. She spent her early childhood in Hackleburg and Rockwood. She and her sister Janet both contracted polio during an outbreak in 1946. After moving to Birmingham she attended Robinson Elementary School and Woodlawn High School. While still a high-schooler Gentle was picked to appear in commercials for Red Diamond Coffee. At the invitation of Birmingham News entertainment editor Lily May Caldwell she entered the Miss Alabama pageant at age 15. As a prize from the pageant she won a trip to New York for screen tests with 20th Century Fox and Warner Brothers. When she landed a contract with Fox she withdrew from Woodlawn and moved to Hollywood with her mother. She completed her diploma with a tutor on the studio lot.

As an actress, Gentle changed the spelling of her name from Lillie to Lili before making her screen debut at age 16 in an uncredited role in Carousel. She followed that with small parts in Teenage Rebel and The Girl Can't Help It the same year. She appeared in a smattering of films over the next six years and also worked on series television. Her break came as Tony Randall's niece in Will Success Spoil Rock Hunter?, released in August 1957, followed closely by Young and Dangerous in which her "innocent girl" character fends off a womanizing charmer, played by Mark Damon, until she can reform him. That Regal Picture, distributing by 20th Century Fox, had its "world premiere" at the Alabama Theatre on October 30. A contingent from the "Lili Gentle Fan Club" lined up for both films well before doors opened. Gentle's only other starring role was the female lead in the 1958 film Sing, Boy, Sing opposite Tommy Sands.

In 1958 Gentle married then 23-year-old Richard Zanuck, son of 20th Century Fox's Darryl F. Zanuck. She terminated her contract with her father-in-law's studio in order to become a housewife, but did return to acting before she and Zanuck were divorced in 1968. Her last role was in 1962's Mr. Hobbs Takes a Vacation with Jimmy Stewart and Maureen OʼHara.

Gentle married Thomas P. Richardson in April 1970, but divorced him less than a year later. Her third marriage, to Timothy W. Guerry in 1975, survives. Gentle lives in Georgia and is confined to a wheelchair by the effects of "post-polio syndrome."