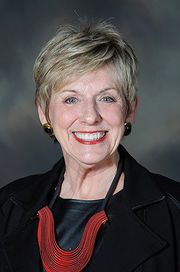 Linda Flaherty-Goldsmith (born c. 1950) is a financial consultant and was the 15th president of Birmingham-Southern College.

Flaherty-Goldsmith grew up in Mississippi. She earned her bachelor of science in commerce and business administration at the University of Alabama and a master's in business administration at UAB. From 1980 to 1993 she served as a vice-president of finance for UAB, and then was promoted to vice chancellor for financial affairs for the University of Alabama System until January 1998. For four years after that, she taught as an adjunct faculty member in the University of Alabama College of Commerce. Flaherty-Goldsmith was also one of the founding members of the UAB Health System board and chaired its finance committee until 2002. She was named "Vice Chancellor for Finance Emeritus" and awarded the President's Medal for her service to UAB in 1997.

She founded her own firm, Flaherty-Goldsmith Consulting LLC, in 2000 and has advised institutional and corporate clients in need of financial overhauls. In 2003 she served as a pro bono consultant on Governor Bob Riley's "Task Force on Tax Reform". she moved to Storrs, Connecticut to serve for three years as vice president & chief operating officer for the University of Connecticut. In 2010 she returned as chief of staff and interim vice president for finance at Birmingham-Southern. In June 2013 she was promoted to special advisor to the president. In June 2016 she was appointed to succeed Edward Leonard III as president of the college. She announced in August 2018 that she would serve through the 2018-2019 academic year before stepping down to help care for a grandchild with medical problems. She later decided to step down effective October 1, 2018, citing new health issues.

Flaherty-Goldsmith is an alumnus of Leadership Birmingham (2001), Leadership Alabama (1994), Leadership Tuscaloosa (1996) and Leadership Greater Hartford, Connecticut (2004). She has served on the boards of YouthServe, the EyeSight Foundation of Alabama, and the National Collegiate Housing Foundation. Since 2013 Flaherty-Goldsmith has also served as a volunteer consultant for the New York-based nonprofit Human Rights First and has spoken locally about efforts to combat human trafficking in the region.

Flaherty-Goldsmith is also an author. She self-published a series of non-fiction vignettes of family life among Mississippi's poor whites in 2010.