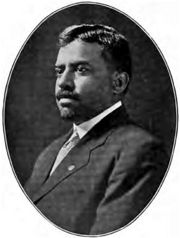 Goin was the son of James J. & Mary Logwood Goin. He attended public schools in Florence and later in Birmingham, but left school at age twelve to operate a grocery store, where he earned enough money to enroll in the prep school of Fisk University in Nashville, Tennessee in 1889. He completed his bachelor of arts degree, with honors, in 1896 and his M.D. at Meharry Medical College in the same city in 1899. He then moved to Birmingham to begin practicing medicine and joined the staff of the Home Hospital. He served as medical examiner for numerous fraternal organizations, as well as for the Reliance Life Insurance Company of Pittsburgh, Pennsylvania and the Old Colony Life Insurance Company of Chicago, Illinois.

Goin was also a director of the Prudential Savings Bank, founded by fellow physician Ulysses Mason, and a co-founder and trustee of Central Alabama College in Mason City. He held shares in the People's Grocery Company and the Fayette Oil & Gas Company. He kept his offices in the Pythian Temple at 310 18th Street North and a residence at 1412 7th Avenue North.

Goin married the former Blanche Thornton of Dallas, Texas in 1899 and had two children, Susye Maye and Lagwood, Jr. He was later married to the former Laura O. Parker.