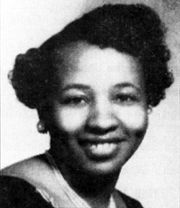 Hendricks' father was from La Grange, Georgia and her mother from nearby Standing Rock in Chambers County, Alabama. The couple moved to Birmingham where he drove a coal truck and she was employed as a cook. Lola and her sister were raised in Southside. After she graduated from Parker High School the family moved to Norwood and she studied for two years at Booker T. Washington Business College, taking classes in business administration, business law, typing and shorthand. After leaving college she took a job with the Alexander & Company insurance firm. She married Joe Hendricks and moved to Titusville.

Hendricks and her husband were members of the National Association for the Advancement of Colored People. When it was outlawed by the State of Alabama in 1956 she became one of the early members of the Alabama Christian Movement for Human Rights, joining at a mass meeting at New Pilgrim Baptist Church where she was a member. The ACMHR, led by Fred Shuttlesworth, organized local boycotts and demonstrations as well as coordinating legal challenges to Birmingham's segregation laws in the 1950s and 60s. She and her husband filed a 195_ lawsuit to force integration of Birmingham City Parks and a 1962 suit to desegregate the Birmingham Public Library. She also served as the organization's correspondence secretary, working from Shuttleworth's office at Bethel Baptist Church from 1956 until the culmination of the 1963 Birmingham Campaign. In December 1962 she traveled to New England as a field director for the Southern Conference Education Fund, raising awareness among Northerners about the realities of Southern segregation and soliciting donations of Christmas toys for movement members boycotting Birmingham's department stores.

In the Spring of 1963, Hendricks coordinated the practical office requirements and cultivated local contacts for the combined efforts of the ACMHR and Martin Luther King, Jr's Southern Christian Leadership Conference. She worked directly for the SCLC's Wyatt Walker during the campaign, helping organize support and logistics for marches and department store boycotts. It was Hendricks who applied directly to Connor for a parade permit for the first day of marches and was told "I'll march you over to the jail, that's where I'll march you."1. At Walker's urging she did not actively demonstrate and risk jailing, protecting her importance behind the scenes. Hendricks' nine-year-old daughter, Audrey, however, was the only child in her class to participate in the May 2, 1963 "Children's Crusade" that brought national attention to Bull Connor's brutal tactics against demonstrators. She spent five nights in jail as minders got word out to her parents that she was safe.

Hendricks left Alexander & Company in 1963 to join the newly-integrated Birmingham office of the Social Security Administration. She was hired originally as a filer, but was promoted to unit clerk before moving to the Equal Employment Opportunity Commission where she became a supervisor. She left in 1983 to care for her mother. In 1988 she rejoined the Social Security Administration where she worked until reaching retirement. She continued to volunteer at the Birmingham Civil Rights Institute and in the mid 1990s she assisted the Birmingham Historical Society in researching movement churches and landmarks for National Register of Historic Places status.

Hendricks died in 2013. She is buried at Elmwood Cemetery.