From Bhamwiki
(Redirected from Lonnie Hannon)
Jump to: navigation, search 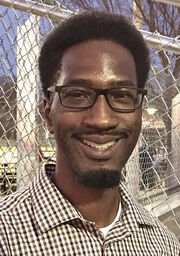 Lonnie Hannon III (born January 6, 1976 in Birmingham) is an associate professor of sociology at Tuskegee University and a professional consultant.

Hannon is the son of Lonnie Hannon Jr and the former Patricia Davis (Butler), and the brother of Latoya Brown. He grew up in East Lake and attended EPIC School and Glen Iris Elementary School. He graduated from Ensley High School's engineering honors program. As a senior he was elected "Mr Ensley High School". He was also active in youth groups at Holy Family Catholic Church, where he remains an active member.

He attended Morehouse College, and then earned his bachelor of arts in social and behavioral science history at UAB in 2000. He remained at UAB to complete a master of arts in sociology in 2005 and a Ph.D. in medical sociology in 2007, with a dissertation entitled, "The Decision to Move: An Analysis of Factors Influencing African Americans in the Ghetto." While in college, Hannon performed at spoken word events as L the Urban Servant, and as a member of Infinite Currents. He published a first book of poems in 2002 and another in 2009.

Hannon joined the faculty at Tuskegee in 2008. He authored a textbook, Life and Society, in 2015.

He founded Hannon Equity and Asset Development in 2014 and contracts for consulting work through its subsidiary, Toussaint Research and Analysis.

Hannon delivered a TedX Birmingham talk entitled "Let's Create More Pathways to Prosperity" in 2016. Since then he has worked as a policy analyst for the City of Birmingham, conducting research on poverty and crime reduction proposals. In 2020 Mayor Randall Woodfin appointed him to the Birmingham Land Bank Authority, where he currently serves as Chair of the board of directors. He also serves on the board of GASP.

Hannon is married to Kimberly Hannon and has two sons, Garvey and Robeson.