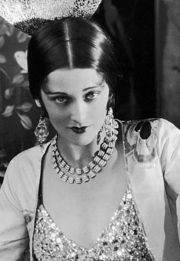 Howell was the daughter of Eli Howell of Kentucky. The family relocated to Moundville when she was five years old and she graduated from Moundville High School in about 1913. She went on to Huntingdon College in Montgomery and, after graduating, became an instructor there. She later moved to New York City, but soon returned to the South to resume teaching.

Howell's second journey to New York in the late 1920s was more fruitful. She won a number of operatic roles and expanded her repertoire into popular music. She performed the leading roles in the stage musicals "Deep River" at the Imperial Theater and the operetta "My Maryland" before signing a contract with Metro-Goldwyn-Mayer in 1930 and moving to Hollywood.

As an MGM actress, Howell starred in "Gay Madrid" with Ramon Navarro and Tyrone Power and in "Free and Easy" with Buster Keaton. Her dressing room was between those of Greta Garbo and Joan Crawford. The studio would not release her to star in Universal's "The King of Jazz" with Paul Whiteman. They did allow her to continue her singing career when not on set. She was the star of a regular program on the NBC Radio Network, and appeared at the London Palladium.

At the start of World War II Howell toured the South with half the proceeds from ticket sales going to the American Red Cross. Her father died in 1942 and she returned home to run the family's Hale County farm and cattle ranch.

Howell died in 1982 at Druid City Hospital in Tuscaloosa. She was inducted into the Alabama Women's Hall of Fame in 1994.