From Bhamwiki
(Redirected from Lou Wooster)
Jump to: navigation, search

Louise "Lou" Catharine Wooster (born June 12, 1842 in Tuscaloosa; died May 16, 1913 in Birmingham) was an infamous madam who famously assisted the sick and dying during the 1873 cholera epidemic.

Many accounts of Louise Wooster's life varies, as she gave several different reports of her life in both her autobiography (published in 1911), and in various news reports of the time. No known photographs or portraits of her survive. 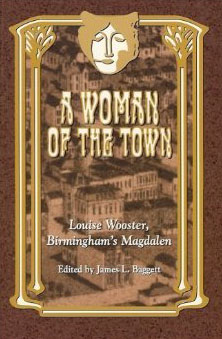 "A Woman of the Town", Wooster's biography edited by Jim Baggett

Wooster was born the fifth youngest out of eight daughters, seven of which were currently living at the time of her birth. Her father, William, was an engineer from New York, and her mother, Mary Chism, was a native of South Carolina. They were married in Tuscaloosa in 1838, where Lou was believed to have been born. William Wooster died in 1851 while the family was living in Mobile, leaving Mary a widow with seven children to care for. She eventually remarried to a man named John Williams. Lou would eventually blame him for squandering the family money.

In 1857, Wooster accounts in her autobiography that her second eldest sister, Margaret, left home and became a prostitute at the age of 14, thus shaming the family name henceforth. After several failed marriages, Margaret later owned a brothel a block over from Wooster's in Birmingham, on 3rd Avenue North, under the name "Maggie Bracken".

Not long after Margaret's "fall", two of Lou's older sisters and her mother, Mary, died. Before her death, Mary charged Lou to take care of her two youngest sisters - Julia and Cornelia. These younger sisters were placed in Mobile's Protestant Orphan Asylum on March 16, 1857, against their deceased mother's wishes and the day after her funeral. Lou went to live with her eldest sister, Frances, who was married to a Mr. Van Buren and currently living in New Orleans with another of her older sisters, Jennie. Frustrated with Van Buren's refusal to take her youngest sisters out of the orphanage, Lou took a ship back to Mobile and forged a letter in Frances' hand, claiming inability to retrieve the girls due to illness, and asked that they be received into Louise Wooster's care. Louise removed her sisters from the orphanage on April 15, 1857 - signing the name Mrs. Van Buren on the release papers.

Refusing to return to her family in New Orleans, Wooster took refuge with Robert A. Harris, a family friend and a future Confederate Major in the First Special Battalion, Louisiana Infantry. In her autobiography, he is described under the pseudonym "Major Robert Haylow". It is to this man that Wooster attributes her subsequent "fall". Though in her autobiography, Wooster claims that she was "barely eleven years old" at the time of her seduction, she was actually around fifteen. Van Buren, her sister's husband, found Wooster living with Harris, and took her back to New Orleans with him to live with her sisters. She worked as a shop girl in New Orleans for a time, and then briefly in East Pascagoula, Mississippi, when she finally returned to Mobile and Harris. Not long after that, Harris deserted her and Wooster was taken in by another male friend while she had yellow fever, who then left her in the care of prostitutes at a local brothel.

In order to respect her deceased parents' memory, she moved into a Montgomery brothel to become a prostitute herself, instead of staying in Mobile. In the 1860 census she and her sister were listed as residents of Madam Jenny Davis' house, with the token occupation noted as "seamstress". A decade later she was listed as a "schoolteacher", although her residence, shared with other young women, was noted as a "House of Ill-Fame".

Wooster experienced a number of failed romantic relationships. She attempted suicide when one of her paramours, with whom she had been living, died of infection a week after being shot in a fight.

It was then, while living in Montgomery, that Wooster claims to have had a passionate romantic relationship with John Wilkes Booth during the first years of the Civil War. Booth was in Montgomery, starring in several stage roles, in late October to early December of 1860, but other than Wooster's accounts, there is no evidence of a relationship between the two. Aside from the account given in her autobiography, Wooster gave several known false accounts to newspapers years later about where and how Booth and she met, creating a sensation with her conspiracy theory that another man, and not Booth, was killed by federal agents. She also claimed to have received an unsigned, undated letter from Booth several months after his supposed death. She was known to keep a scrapbook full of mementos from, and about, Booth, which she showed to newspaper reporters in her later life, including a monogrammed handkerchief and several letters. It is not known whether these are her own personal mementos, or if they were fabricated for the reporters.

It was during this time that Wooster claimed to have been inspired to be an actress, and when her and Booth's relationship broke off, she performed as an actress in Arkansas and New Orleans. After suffering a brief bout of tuberculosis, she had to quit her stage career, and in 1869 she moved back to Mobile. 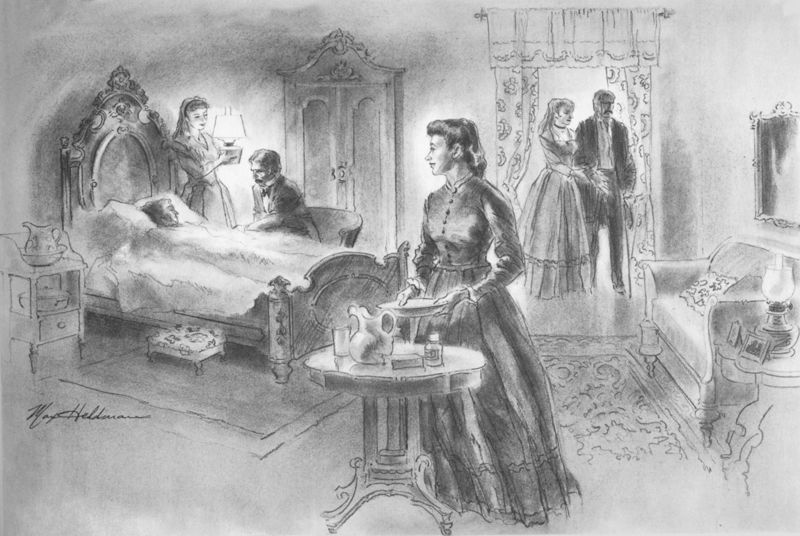 Just a few months before the infamous cholera epidemic that hit the city, Louise Wooster moved to Birmingham. She expressed her hopes for the newly-established town in her autobiography: "About this time the great and growing Magic City was being incorporated. It was at that time a railroad crossing with a little town of about twenty or thirty houses, and very poor houses, at that. The papers throughout the state were full of Birmingham, and very soon I became absorbed in it. And here I determined to cast my lot."

When the epidemic hit, Wooster was one of several that stayed in the city to help the sick, though at least half of the population of 3,000 had fled in panic. She wrote that at first she was apprehensive of how her offers to aid the sick would be received, but that she could "finally stand it no longer", and offered to do whatever was needed. Despite her reputation, she was readily admitted into the homes of the sick to nurse the sick and dress the dead for burial. She also claimed to have given all the money that she had to those in need during those dark days.

In composing his official report of the disease's course in Birmingham Mortimer Jordan Jr did not mention Wooster by name. He did, however, include a paragraph praising the "women of the town" for their magnanimous behavior and expressing the city's sympathy and gratitude for their selfless efforts. Though the epidemic subsided after several weeks, its effect, combined with a national financial panic, left Birmingham in a state of economic collapse. Wooster returned to Montgomery to pursue her trade for nearly a decade, returning to a resurging boom-town Birmingham in the 1880s.

Not much is known about Wooster during this period. It is known that she is listed in the 1880 Montgomery directory as either operating a boarding house or a brothel that included her youngest widowed sister Cornelia, Cornelia's son, two "lady boarders", and nine African American servants. At the lack of knowledge about her life until she established her brothel in Birmingham in 1884, Wooster notes in her autobiography is that she "would like to drop the curtain for five years", presumably the five years between 1876 and 1881, as "those five years of suffering are too dark for other eyes". She then goes on to vaguely mention her brutal treatment at the hands of a man residing in Montgomery. 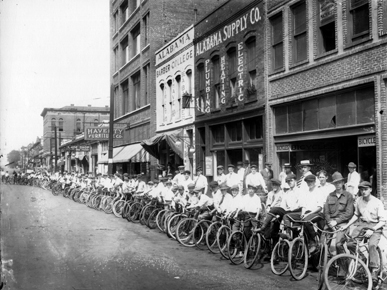 As far as documented records are concerned, Wooster shows up again in 1881 in Birmingham city records as having bought the first of two plots at Oak Hill Cemetery, this being the first property she had ever purchased in Birmingham, but then disappears again until 1884.

Madam of a Birmingham brothel

In 1884 Wooster established a brothel at 1914-16 4th Avenue North in Birmingham. In the City Directory published that year, Belle Howard, Maggie Meeks, Maggie Lewis, Kittie Gilmer, Clara Martin, Beulah Joseph and Pearl Mueller were listed as boarders in her house, and Lucretia Bell as a servant.

In 1887, Wooster's property was valued, for tax purposes at $4,000, and in 1888, Wooster purchased the building adjacent to her brothel for $12,000. The 1900 census described her as a "Bawdy House Keeper". Until she retired in 1901, Wooster, with her youngest sister Cornelia and her sickly son, lived in one of the buildings while she operated the brothel in another.

Her philanthropy to the city has been well noted. In 1887, she was listed glowingly in the Birmingham Age newspaper for pledging $100 to a charity hospital campaign. She also paid to bury several penniless prostitutes, including some of their deceased infants, on her second plot at Oak Hill Cemetery. 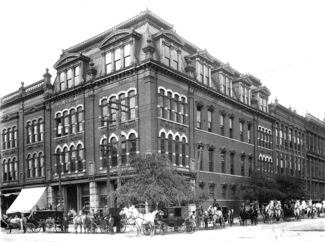 A photograph of the Watts Building, sometimes purported to show Wooster's funeral procession 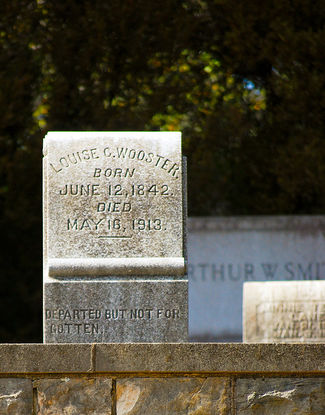 In 1908, six years after her retirement, Wooster moved to a small house at 1909 Avenue D on Birmingham's Southside, and leased her former residence, along with the former brothel, to other businesses. She published her own autobiography, "The Autobiography of a Magdalen" in 1911. The autobiography contains Wooster's personal account of her past, though it must be noted that her credibility is often questioned, as there are some inconsistencies in dates and facts, and Wooster frequently lied about her past to the newspapers of her time. 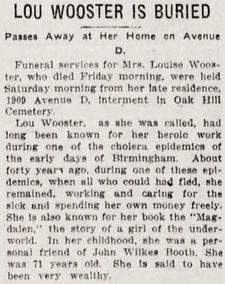 Wooster's obituary in The Birmingham News

Louise C. Wooster died on May 16, 1913, just before her 71st birthday. The cause of death is listed as "Bright's Disease" - a general term for degenerative kidney disease. According to her friends and family, Wooster drank heavily in her last years. She is interred at Oak Hill Cemetery in the plot that she bought thirty-two years before.

A popular legend claims that her funeral train consisted of several empty coaches sent anonymously from her admirers to honor her passing, however this is more than likely false, as no newspaper mentioned such a scene, and one newspaper of the time noted that she was taken to her grave "practically unescorted".

As to Wooster being the inspiration for Margaret Mitchell's character "Belle Watling", the prostitute with a heart of gold, in "Gone With the Wind", this also is more than likely false. There is no evidence that Margaret Mitchell had ever met Wooster. It has been more credibly suggested that the character of the Atlanta madam was based on Belle Brezing of Lexington, Kentucky, the hometown of Mitchell's husband, though Mitchell has denied the suggestion.

Wooster continues to have local notoriety in the area. In 1971, she was the featured character in "Beloved Valley", a historical drama written and performed for Birmingham's centennial celebration. The Wooster Lofts, the first loft development in Birmingham, was named in her honor, and in 2007, the UAB School of Public Health inaugurated the Wooster Award for exemplary service in public health. The inaugural winner was Alabama Representative Patricia Todd.

There has also been an opera written about her life, "Louise: The Story of a Magdalen" commissioned by Alabama OperaWorks in 2000. The book by Sally M. Gail and score by Dorothy Hindman won the Nancy Van de Vate Composition Prize for Opera in 2004.