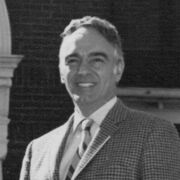 LeVaughn and his twin brother, Roland L., were the sons of Roland H. and Annette P. LeVaughn of Niagra Falls, New York. After graduating high school, Louis LeVaughn served from 1943 to 1946 in the Marine Corps as a fire control radar operator with the 7th Anti-Aircraft Artillery Defense Battalion in the Pacific during World War II. He then earned a B.A. in 1949 and a M.A. in school administration in 1950, both from the University of Alabama.

LeVaughn next became principal of Shades Cahaba Elementary School as the Homewood City School system was formed in 1970. There, he oversaw one of the first programs in the state that kept special-needs students in the mainstream, rather than isolating them. He also oversaw the reacquisition and replacement of the school's original cast-concrete owl mascot after its discovery in an abandonded lot. He retired in 1981.

He later served on the board of the Homewood Library from 1986 to 1994, the final two years as its chair. He was also a volunteer with the American Cancer Society.

At his death in 2010, LeVaughn was survived by his wife of 41 years, Virginia Popwell Grisham LeVaughn, a son, two stepchildren, and four grandchildren. He was buried at Alabama National Cemetery in Montevallo.