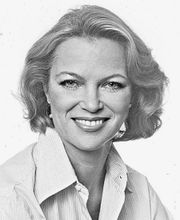 Louise Fletcher (born July 22, 1934 in Birmingham) is an actress, best known for her Oscar-winning performance in the role of "Nurse Ratched" in the 1975 film One Flew Over the Cuckoo's Nest.

Fletcher, the second of four children, was born in Birmingham to John and Estelle Fletcher, a deaf couple who worked with the hearing-impaired in Alabama. Louise and her siblings, Roberta, John and Georgianna, were all born with normal hearing. She was taught to speak by a hearing aunt, who also introduced her to acting. After graduating from Ramsay High School she attended the University of North Carolina. She then traveled to Los Angeles, where she found work as a secretary by day and took acting lessons by night.

Fletcher began appearing in several television productions, including the highest-rated episode of Maverick, but married Jerry Bick and took time off to raise her two children; she eventually divorced Bick, who died in 2004. In 1974, she returned to film in Thieves Like Us. Miloš Forman saw her, and cast her (possibly because of her height and bearing) as McMurphy's nemesis Nurse Ratched in One Flew Over the Cuckoo's Nest, for which she won the Oscar for Best Actress. She also appeared in such films as The Cheap Detective, Exorcist II, Firestarter, Brainstorm, Flowers in the Attic, Big Eden, Two Moon Junction, and as Sebastian's aunt in Cruel Intentions.

Fletcher was nominated for an Emmy Award for her recurring role on the television series Picket Fences. She also had a continuing role in Star Trek: Deep Space Nine as the scheming Bajoran religious leader Kai Winn Adami. Fletcher played the character of Ruth Shorter, a supporting role, in the 2005 film, Aurora Borealis, alongside Joshua Jackson and Donald Sutherland, and appeared in the Fox Faith film The Last Sin Eater.