This article is about the 1935 building. For other uses, see Loveman's. 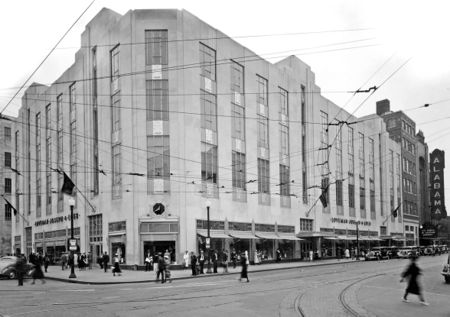 The Loveman's building is a large building constructed for the Loveman, Joseph & Loeb department store in 1935. It occupies the northeast corner of Block 87, on the southwest corner of the intersection of 19th Street and 3rd Avenue North. It housed the flagship store for the small chain until the entire business went bankrupt in 1980. The vacant store was renovated in 1998 and now houses the McWane Science Center children's museum.

The building replaced an earlier complex of buildings, begun in 1891, on the same site. Those buildings burned in a massive fire which broke out on March 10, 1934 in the sub-basement. The new four-story structure was designed in a bold, clean Art-Deco style by the firm of Miller, Martin & Lewis Architects. The octagonal clock at the corner quickly became a landmark in the downtown retail district, often a place where groups would meet up.

On the interior, the store's departments were arranged similarly to how they had been in the older complex. The store was one of the first in the United States to be fully air-conditioned and the first in the state to have escalators. Clerks sent sales slips and payments to a central cash register by vacuum tube and waited to receive the customer's change.

The four first floor entrance vestibules were clad in white Carrara marble and grey Alabama marble, which were also used as flooring and trim at the elevator banks. The elevator doors were covered with French walnut, inlaid with metal. Display cases, built of dark-stained walnut with black marble or formica tops and Avodire interiors. The structural columns were clad with a "lastik-veneer" of "Oriental walnut", which was also used as wall paneling throughout the building. The veneer were shipped by air express in order to meet the construction schedule, and it was said that, at 8,000 pounds, it was the largest such shipment ever received in Birmingham.

A mezzanine level, accessible by stair, contained a tea-room and soda-grill furnished in Oriental walnut, prima vera, mahogany, and green formica. The railings were designed with horizontal aluminum dividers that "give you the feeling of being on the bridge deck of a great ocean liner." Rest rooms and a lounge area on that level contained special accommodations for children, such as lowered drinking fountains. Also on the mezzanine level were the optical department and the beauty salon. The salon featured terrazza floors and pink formica around the shampoo lavatories. It was also boasted that "individual compartments for your hat and coat have concealed gadgets that come to life and enhance your beauty in the most satisfying manner."

The escalators, the first installed in Alabama, were finished in French walnut and aluminum and geared to run at ninety feet per minute. An attendant was stationed at each end to help those intimidated by the technology. They connected the first floor to the "fashion floor" on the second level, bypassing the mezzanine.

The third floor, accessible by elevator, featured a knotty-pine finish. Artificially-lit false windows on the walls and columns provided light to the rug and carpet displays. A "Knitting Knook" was designed in 17th century style, but arranged like a newspaper copy desk to facilitate instruction. Eight model rooms showed off furniture and draperies in up-to-date living arrangements, and a Colonial-style "Trutype House" was constructed in the showroom to demonstrate appropriate period-style furnishing arrangements. The house was clad and shingled with Tennesteel metal siding marketed by TCI. The parquet floor was constructed to "float" on a cork subfloor for cushioning.

The fourth floor was designed to be light and airy, with pastel yellow, rose and blue casework rising from black bases. Tabletops were covered with velvety linoleum. Three additional model rooms were located near the elevator: an all-gas kitchen furnished by the Birmingham Gas Company, an all-electric kitchen furnished by General Electric and Birmingham Electric, and a model bathroom trimmed in blue and ivory.

The store's general offices were arrayed along the 19th Street end of the fourth floor. These included offices for Joseph Loveman, P. C. Vaughan, V. R. Lockhart, and H. A. Lipson, as well as the advertising department, the paymaster, an adjustment office, a superintendent, executive secretaries, a controller, stenographers, bookkeepers, and the central cashier's tube room.

In June 1949 Loveman's opened a new "store for the home" facing 2nd Avenue North and connected it on 2nd, 3rd and 4th floors of the main store by a bridge over the alley.

During the Civil Rights Movement, Loveman's was one of the many downtown stores picketed to promote the hiring of more African American clerks.

Under president John Breyer the retailer completed a major remodeling of its downtown store in 1969 and added a 400-space Loveman's parking deck in 1970. The store closed, after the chain filed for bankruptcy, on April 5, 1980. A liquidation sale was held at the downtown location later the same month.

The structure was added to the National Register of Historic Places on April 14, 1983. Before building their new building on Park Place, the Birmingham Public Library board evaluated the possibility of taking over the former store for a new central library.

Eventually the store and parking deck were acquired by Discovery 2000 and remodeled as the home of the new McWane Science Center. The former Newberry's store, on 19th and 2nd Avenue North, was torn down for the IMAX Dome theater which faces the museum's entrance plaza. The former entrances to the Loveman's building were closed.