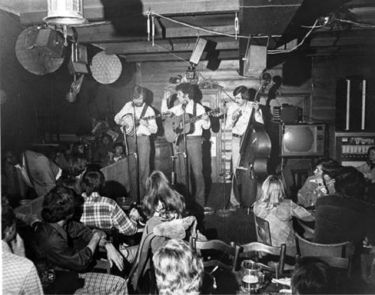 Three on a String on stage at the Lowenbrau Haus

Lowenbrau Haus (later, just Lowenbrau) was a nightclub located at 2920½ 18th Street South Homewood, in the basement of the Stevens Building.

Owned by Julian Liner, the club featured folk singers and groups during the 1960s. House bands at the club included Richard and Jim, Jack Hare, Robert Shillito, Grant & Ginger and Three on a String. The club's kitchen sold hot dogs and tamales for 10¢ a piece, and Saturday nights were open talent competitions hosted by Jerry Ryan.

The former club, below Sikes Shoe Company, now serves as the bakery area for Savage's Bakery.