From Bhamwiki
(Redirected from Luman Harris)
Jump to: navigation, search 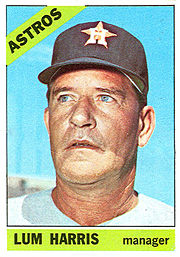 Harris' playing career began with the Atlanta Crackers of the A1 Southern Association in 1937. His catcher that season was Paul Richards, who in 1938 became Atlanta's player-manager. Richards and Harris would form a decades-long association in baseball at the minor and major league levels.

Harris compiled a 35-63 record with a 4.16 earned-run average in 151 American League games with the Philadelphia Athletics and (briefly) Washington Senators from 1941-47. The remainder of his major league career would be spent working in tandem with Richards, initially as a coach with the Chicago White Sox (1951-54), Baltimore Orioles (1955-61), and Houston Colt .45s (1962-64). In each case he worked under Richards, who was either his manager, general manager, or (in Baltimore from 1955-58) both.

In 1965, Harris was promoted by Richards to manager of the newly rechristened Houston Astros, serving for the team's debut season in the Astrodome. It was actually his second major league managerial post: he had briefly managed Baltimore in September 1961 when Richards resigned to take the front office reins of the expansion franchise in Houston.

When the Braves slumped, Richards was fired during the 1972 season, and Harris was replaced as manager by former Braves third baseman Eddie Mathews. Harris' final major league managerial record was 466-488.

Harris was inducted into the Alabama Sports Hall of Fame in 1994.

Harris died of diabetes at age 81. He is buried at Elmwood Cemetery in West End.

Luman Harris Park in Gardendale is named in his honor.