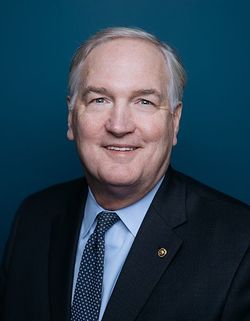 Strange was born in Birmingham and grew up in Sylacauga and Homewood. He became an Eagle Scout at 13 and attended Shades Cahaba Elementary School and Homewood Middle School. He graduated from Shades Valley High School in 1970 as an All-State basketball player.

Strange attended Tulane University on a basketball scholarship, and he earned his bachelor degree in political science. He spent a year working on a Merchant Marine oilfield supply vessel in the North Sea before returning to Tulane to attend law school. He completed his Juris Doctorate in 1979 and was admitted to the Louisiana Bar the same year.

Moving back to Birmingham, Strange began working for Sonat, and was promoted to direct their Washington D.C office in 1985. When he returned he opened a law practice with Jack Selden, which merged into Bradley Arant Rose & White in 1998. He left Bradley Arant in 2008 to form his own law firm, Strange LLC, which focused on economic development work.

Since the 1990s Strange has been active in supporting Republican candidates for office. He founded the Red Mountain Republican Club in 1997 and was chair of the committee to elect fellow Tulane alumnus Bill Pryor as Alabama Attorney General in 1998 and 2002. In his first run for political office, Strange captured the Republican nomination for Lieutenant Governor in 2006 by defeating George Walllace Jr. He narrowly lost the general election to Jim Folsom Jr.

He is active in the Rotary Club of Birmingham and the Monday Morning Quarterback Club. He attended Leadership Alabama. He served on Governor Riley's "Task Force to Strengthen Alabama Families" and was active in the 2000 and 2004 presidential campaigns for George W. Bush. In 2006 he was the Republican nominee for Lieutenant Governor of Alabama, but lost to Jim Folsom Jr. In 2008 he was appointed to the Board of Trustees for Talladega College.

Strange, formerly of Mountain Brook, now lives in Pike Road, a suburb of Montgomery, with his wife, the former Melissa Berry. He has two sons, Luke and Keehn.

On May 13, 2009, Strange entered the 2010 Republican primary for Attorney General of Alabama. He was successful in unseating incumbent Troy King in the primary and went on to defeat Democratic candidate James Anderson in the general election.

As Attorney General, Strange defended the state in federal suits filed to block enforcement of controversial laws such as the Beason-Hammon Alabama Taxpayer and Citizen Protection Act which enacted a range of measures intended to discourage undocumented immigrants from being able to access services in Alabama. Many provisions of that law were struck down in federal courts.

Strange also filed several lawsuits against the United States government to protest regulatory decisions, including the Interior Department's rules for calculating offshore oil and gas leases, the Education Department's guidance on accommodating transgender students, and the Obama administration's "Clean Power Plan" for investments in renewable energy infrastructure. In January 2015 he sent a 23-page letter, apparently written by Balch & Bingham attorneys, to the U.S. Environmental Protection Agency protesting their consideration of the 35th Avenue Superfund Site for placement on its "National Priorities List", which would have empowered the agency to seek damages from pollutors.

Strange also served as coordinating counsel for the states negotiating a settlement for damages incurred by the rupture of BP's Deepwater Horizon oil well in the Gulf of Mexico. In 2016-2017 Strange also chaired the Republican Attorneys General Association.

During Strange's term, his office prosecuted Speaker of the Alabama House of Representatives Mike Hubbard. Strange recused himself from the matter, appointing Van Davis as Acting Attorney General for that case. Strange implied that his office was also investigating then-Governor Robert Bentley for possible misuse of his office while attempting to cover up an alleged extramarital affair with a member of his staff, and urged the state legislature to hold off on debating impeachment pending such an investigation.

At the same time, Strange was one of twenty candidates who met with Bentley to discuss filling the United States Senate left vacant by Jeff Sessions' nomination as United States Attorney General.

Bentley announced his choice of Strange on February 9, and Strange was sworn into office the same day. Many viewed the appointment as either an effort to undermine the Attorney General's investigation, or to reward Strange for not pursuing prosecution. Bentley resigned from office in April 2017 as part of a plea deal on ethics charges.

When filling Sessions' seat, Bentley had initially declined to schedule a special election in advance of the 2018 general election. State Auditor Jim Zeigler and others that the State Constitution required a special election to be held "forthwith," and that 21 months did not meet that requirement. After she was sworn in to replace him, incoming Governor Kay Ivey announced that a 2017 U.S. Senate special election would be held, with primaries on August 15, and a general election on December 12, 2017.

Strange enjoyed endorsements from President Donald Trump and many national Republican leaders, but was forced into a primary run-off with former Alabama Supreme Court chief justice Roy Moore. Moore won the runoff by a 9% margin and faced Democratic challenger Doug Jones in the general election. After the publication of several allegations of sexual assault and misconduct in Moore's past, Jones won a narrow victory in the general election. Strange yielded his seat to Jones in January 2018.

In 2019 Strange was employed by members of the Sackler family, owners of Purdue Pharma of Stamford, Connecticut which manufactures the opioid OxyContin. The company sought to settle thousands of lawsuits brought by states, counties, municipalities and Native American governments. Strange lobbied former colleagues in the Republic Attorneys General Association regarding what would need to be included in an settlement that would end the litigation.