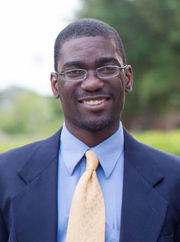 Lyord Watson Jr (born c. 1979 in Brewton) is an associate minister at Greater St John Missionary Baptist Church and a representative of District 2 on Birmingham Board of Education in the

Watson's father was a laborer and his mother, Rhoda, was a school teacher. Watson earned his bachelor's degree in business management in 2001 at Samford University, where he also played wide receiver for the Samford Bulldogs football team. He returned to complete his master's in divinity at Samford's Beeson Divinity School in 2010. He was ordained on September 12 of that year. Watson and his wife, Katrina reside in Birmingham.

Watson successfully challenged long-time Board of Education member Virginia Volker in the 2013 Birmingham municipal election with 62% of votes.

In addition to his ministry and service on the Board of Education, Watson is a board member for the Community Investment Network, a program coordinator for the Birmingham Urban League, and a participant in Birmingham Young Professionals United. He has also worked with numerous other organizations in the area. He was a founding member of the Birmingham Change Fund and is founder and CEO of the Penny Foundation.