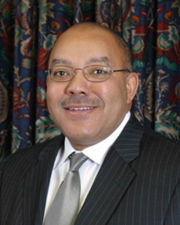 Macaroy Underwood (born November 7, 1959 in Eutaw) is a former general manager of the Birmingham Water Works and finance director for the City of Birmingham.

Underwood was one of nine children born to a bulldozer operator and cook in rural Greene County. He followed a sister into the accounting program at the University of Alabama and, after graduation, went to work for the firm of Banks, Finley, White & Company, Certified Public Accountants, which counted the city of Birmingham among its public clients.

In 1987 Underwood was hired by the city as a senior auditor in the tax division. He held that job for two years before returning to the Birmingham office of Banks, Finley, White & Company as a partner. In 1989 he applied for the job of Jefferson County Finance Director, losing out to Steve Sayler. Sayler hired him, however, as his assistant. He returned to Birmingham City Hall in 1994 as Director of the Finance Department, replacing the retiring Hoyt Beningfield.

In 2001, Underwood left to become the Assistant General Manager of Finance and Administration for the Birmingham Water Works under Mike Vann. Mayor Bernard Kincaid appointed Michael Johnson to succeed him as acting director.

Underwood was quickly promoted to Deputy General Manager, and then to General Manager on March 1, 2005. The board claimed that Underwood resigned his position on December 5, 2018. Through his attorney, Underwood denied offering to resign. Assistant general manager Michael Johnson was (again) appointed to succeed him on an interim basis.

Underwood is Certified as a Public Accountant, a Government Finance Officer and Government Finance Manager. He has an extensive background in Computer Information Management. In addition to his service to the Water Works Board he has served on the Birmingham Regional Chamber of Commerce, and the UAB Accounting Advisory Board. In 2017 Underwood became the first African-American elected to chair the board of the Association of Metropolitan Water Agencies (AMWA).