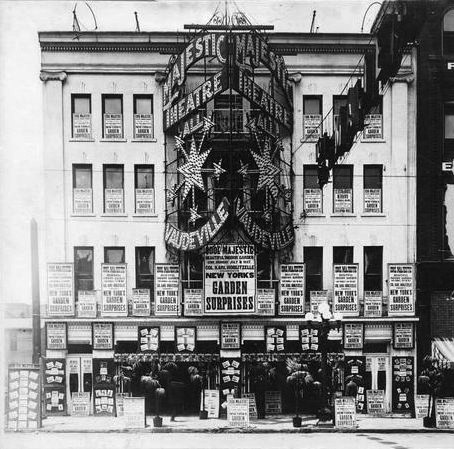 Exterior of the Majestic Theatre

The Majestic Theatre or New Majestic, nicknamed the "pretty little playhouse", was a 1,200-seat theater and cinema located at 1808-1810 3rd Avenue North. It was opened in 1906 as the city's fourth Vaudeville hall ,and presented a full schedule of nightly entertainment and daily matinees. The theater later hosted various mixtures of live shows and motion pictures, including early releases on the "Majestograph" and Edison's "Kinetophone",

The theater project was developed by Karl Hoblitzelle's newly-formed Interstate Amusement Company. Hoblitzelle was an assistant to the director of works for the 1904 Louisiana Purchase Exposition in St Louis, Missouri (where he would have viewed Vulcan towering over the Alabama Mineral Exhibit in the Palace of Mines and Metallurgy). His experience there convinced him of a major opportunity in bringing Vaudeville into the southern United States, and he quickly began opening theaters in Texas, Arkansas and Louisiana before extending his circuit to the booming city of Birmingham.

Construction on the site, which was owned by B. M. Allen since 1899 began in October 1905. The address was previously used by the Jesse French Piano & Organ Company showroom, which moved to 2018 2nd Avenue North. George H. Johnson, a theater builder from St Louis, Missouri contracted for the work of erecting the four-story masonry building for Allen to lease to Hoblitzelle. Interstate claimed that the 1,200 seat auditorium with its 40-foot-deep stage was, "constructed on modern lines of Theater architecture, insuring perfect accoustics in every corner of the house—an unbroken line of vision—making it essentially a perfect Theater." [sic]. In its review of the opening, however, the Birmingham News, confidently predicted that, "when the cooler weather comes and there will be no necessity for electric fans the acoustics of the house will be excellent."

The ground floor would have space for a retail tenant and the upper floors would be leased as offices to help finance the development. The first year's rent for the theater space was $6,000, paid upon signing of the roughly $40,000 construction contract. The total cost of the development, including furnishings and equipment, was later reported as $75,000.

The opening night, scheduled for February 1906, was delayed until September 10, partly because the city's building inspector, stopped work until some portions could be rebuilt in conformance with the city's code. Frank Parry was engaged as the theater's manager. He noted that Birmingham would serve as a regional headquarters for Interstate's "Majestic circuit," and assured the public that, "we expect to maintain a very high standard at the Majestic. Every act produced here will be absolutely clean and we expect to cater to women and children. Especially this will be true of the matinee performances." When it opened, the Majestic employed a staff of uniformed "attaches" to attend to patrons, allowing mothers to drop off children for matinee performances unaccompanied. The facility included ladies' retiring rooms staffed with maids and footmen stationed at the curb to assist those arriving by carriage. Fire escape stairs manufactured by the Mechanics Iron Works of St Louis, Missouri were installed for the safety of patrons.

A sample bill from the theater's opening season included a full-cast production of "Pals"; the "Parisian Marvel" Jeanette Laurelle; Lew Wells "The King of Monologue and Saxophone Eccentricities"; Veolette & Old "Telepathic Mind Reading"; Belle Gordon "The Champion Girl Bag Puncher"; and De-Coe, the "Ten-Story Man". Harry Stevenson succeeded Parry as manager in November 1906. One of his first acts was to extend an invitation for free admission to chaperoned groups from the Boys Industrial School, the Mercy Home, and the St Thomas Home-on-Hill orphanage for a Friday matinee. The overall regular admission prices were reduced to 10 to 50 cents.

In March 1907, after the regular Vaudeville season closed, the Majestic hosted four performances by Warfield and Hopper, under arrangement with the Shubert Organization. The higher ticket prices inadvertantly bumped the Majestic's annual business license fee from $200 to $300, a fact reported to City Hall by a rival manager.

The off season brought a range of other events into the auditorium through the summer. The Birmingham Free Library Association was organized during a meeting at the Majestic Theater on May 9, 1907. Later that same month the theater hosted a mass meeting called by American Federation of Labor organizer Ben Commons to propose a general strike in support of street railway workers. On June 4 a major wrestling match between Charlie Leonhardt and Jim Parr was staged there. Parr won two "catch as catch can" falls, while Leonhardt claimed an intervening "Graeco-Roman style" pin before a reportedly small crowd. In March 1908 former Majestic Theater treasurer Thomas Maddow was captured in New Orleans and brought back to Birmingham to face charges of embezzlement from the theater. That season the ticket prices were reduced again, to 10 to 30 cents.

By December 1908 Stevenson had been succeeded by Gould. He hosted a benefit on behalf of the Italian Society to raise funds for relief of those affected by the massive earthquake in Messina. The Majestic, which in early 1909 was advertising "Refined Ten Cent Vaudeville and Picture Show" every night, may have been the first theater in Birmingham to regularly exhibit motion pictures. The bill for the week of February 13, 1909 included the James S. Devlin-Mae Elllwood Company performing the short comedy "The Girl from Yonkers", a sensational acrobatic act of stair-descending cycles by Hill & Silviany, a Mexican drama "Beggars" performed by Ann Hamilton & Company, a musical comedy sketch by trick pianist Nick Russell and his wife, Lida, a "surprise act" by the Great Vardaman, presenting three characterizations in female costume, a vocal recital of "Irish Mellodies and 'Coon' Songs" by Tom Moore, a comedy act of vocal impressions by the dainty Mamie Hornish, a program of new pictures exhibited by the "Majestograph" projector, and Capt. Treat's trained seals and sea lions.

After a hiatus, Interstate resumed the Majestic's stop on their regular circuit over the winter of 1909–1910.

Gould was succeeded by R. P. Whitfield in July 1912. His treasurer, Leon Burger, was promoted by Hoblitzelle to manage the Folly Theatre in Oklahoma City in September, and was succeeded by E. B. Coleman. That same month Hoblitzelle and Jake Wells formed the Birmingham Theater Company to jointly operate the Majestic and the Orpheum Theatre. Each partner took 149 shares of stock, with local representatives Martin Semon and A. A. Chouteau holding 1 share each. Semon took over as general manager of the two theaters, while Whitfield pushed Coleman out as treasurer. The partnership linked the Western and United Vaudeville managers' associations and ended a bitter local rivalry where each each theater had tried to undercut the other by reducing ticket prices and cutting acts short to make up the loss.

In July 1913 the Majestic exhibited a demonstration of Thomas Edison's "Kinetophone", a prototype for a "talking picture". By that summer the Majestic was primarily featuring feature films, such as the 4-reel "Les Misérables", George Kleine's six-reel epic "Last Days of Pompeii" and Paul J. Rainey's "African hunt pictures". Vaudeville soon moved over to the new Lyric Theatre on the same block. Promoters of other events, such as the Zamora Temple Ancient Arabic Order of Nobles of the Mystic Shrine, and a tour of the Vanderbilt University Glee Club, continued to book the auditorium in 1914.

In April 1914 Allen sold the Majestic Theatre building to the Commercial Realty Company, headed by Louis Clark, who also owned the adjoining Lyric property. The lot he purchased for $5,000 and improved for $40,000 returned $6,500 per year for eight years in rent, and sold for $125,000, giving him a net return of $132,000. In 1915 Hoblitzelle relaunched his rivalry with Keith, bringing Vaudeville back to the Majestic under manager Edward Raymond, in direct competition with the Lyric. The interior was re-decorated extensively so that, "old patrons of the Majestic will hardly recognize it." The new program debuted on February 22. The regular schedule was adjusted to allow for two evening bills, each featuring five live acts and two pictures, for prices ranging from 10 to 35 cents. Despite the vaunted return of stage acts, the introduction of feature-length Charlie Chaplin films in March made the biggest impression on patrons. W. C. Herrell was the Majestic's projectionist.

In January 1916 department store owner Louis Pizitz purchased the Majestic Theatre property from Clark for $150,000. He said that he would continue to operate it as an "amusement enterprise for a time at least, plans for the future being undecided at present." In May of that year J. R. Hornaday arranged for special free screenings of a 7-reel educational feature chronicling the history of education. The theater re-opened on June 4, 1916 as Birmingham's "newest house," exhibiting features from the Fox Film Corporation. Manager H. F. Niel also oversaw the Southeastern Film Exchange, headquartered in Birmingham.

In September the Majestic changed to a continuous program with "playlets" and performances by a house chorus alternating with newsreels and other pictures. In 1917 the theatre began a popular "Country Store" promotion where patrons were given coupons for gifts at area shops. The stage was frequently stocked with groups of "pretty girls" as attractions.

In December 1918 the expired Interstate lease was taken up by the operators of the "Virginia-Carolina Circuit", with E. B. Rickarts serving as theater manager. He oversaw another interior renovation. The new program never really got underway, however, and the a different promoter took over the lease, installing Frank Hammond and manager for the New Majestic, and booking the Maddocks-Park Players (F. L. Maddocks and Mae Park) to stage a production of "Tess of the Storm Country" beginning on January 13, and continuing on as a stock company. Their 17-week spring engagement was later reported to have established a record for a stock company run, and the same group were engaged to return on September 1 for a fall season of two daily performances. Maddox added the duties of theater manager to his role as stage manager. The stock company remained with the Majestic until 1921, by which time Maddox was majority stockholder of the National Amusement Company which operated the theater.

In April 1921 Maddocks sold his interest to Clint Dodson and Ralph Chambers of Miami, Florida. Maddock's company closed their season with a production of Octavus Roy Cohen's "Come Seven". Dodson relocated to Birmingham with the Pickert Stock Company in tow. The Majestic was one of several downtown properties damaged by high winds accompanying the 1921 West End tornado. In July it was announced that the Maddocks-Park Players would return to the Majestic's stage. For a September production Jim Park involved the entire company in the production of papier-mâché peaches to adorn a scene set in an orchard.

In October it was announced that the National Amusement Company could not renew its lease and that Pizitz had reached an agreement with the Duke Brothers Furniture Company to occupy a new three-story business house at that location. Demolition of the 15-year-old theater was scheduled to begin on January 1, 1922. They anticipated being able to open for business in the new Duke Brothers building in April.

Keeping the stage lit through December proved a challenge to Maddocks as his proposal to adopt the "commonwealth system" to share proceeds between all parties was refused by members of the Actors' Equity Association. Unable to pay contract fees, he was forced to close the theater. Eventually four "benefit performances" were scheduled for December 24 and 25, allowing the popular personalities, including Maddocks' wife, Mae Park, to say their farewells to the Birmingham public. The company's farewell was followed by a five-day Vaudeville booking featuring Earl Fuller's jazz orchestra and the Schliesman Saxophone Sextette.