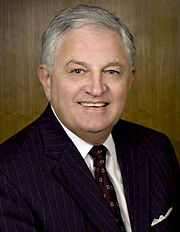 Malcolm Portera (born January 31, 1946 in West Point, Mississippi) is the fifth chancellor of the University of Alabama System.

Portera completed grade school in West Point and earned his bachelor's and master's degrees at Mississippi State University in Starkville. He went on to complete a doctorate at the University of Alabama and has worked throughout his career in college administration and industrial development. He was a vice president and vice-chancellor at the University of Alabama, leaving in 1996 to found Malcolm Portera Associates, a business development and strategic planning firm.

In January 2012 Portera announced his retirement, pending the hire of his replacement.

Portera and his wife, Olivia, have two sons; Andy and John Paul, and four grandsons.