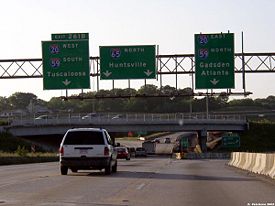 Photo from the south along Interstate 65.

Malfunction Junction is the common nickname of the heavily traveled intersection of I-20/I-59 and I-65 located just to the northwest of the downtown Birmingham core. Along I-20/I-59 this is Exit 124 and along I-65 this is Exit 260. It has earned this moniker due to its irregular configuration that requires motorists to shift across multiple lanes to traverse the intersection.

The junction opened to traffic in 1970. In 1990, plans were made to completely overhaul the interchange due to increasing traffic demands. As part of this reconstruction multiple lanes would be added in addition to completely overhauling the interchange itself. Today, over 260,000 vehicles pass through the junction daily which is nearly twice the amount it was originally designed to carry.

The junction's tight turns and short merging distances do not meet current interstate standards. Additional lanes through the interchange were added in 2003 to alleviate some congestion, with future plans calling for its complete reconstruction. Continued work on the planned Northern Beltline should also alleviate some through traffic on the junction.

In 2001 the Alabama Department of Transportation contracted with Good Hope Contracting of Cullman to resurface the junction with a NovaChip ultrathin bonded wearing course composed of a course-aggregate hot mix over a special polymer-modified asphalt membrane, applied in a single pass. The projected life-span of the special non-skid surface is 10 years. 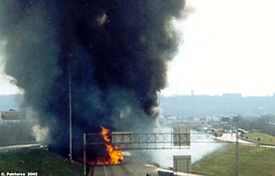 On January 5, 2002, an accident resulted in the death of trucker Tim Dyson after his tanker truck was cut-off by another motorist and lost control while heading northbound through the interchange along I-65. The resulting explosion caused severe damage to the bridge connecting I-20/I-59 southwest with I-65 south, and a plume of black smoke visible from throughout the city. The bridge would remain closed until February 25, 2002, resulting in motorists being detoured to U.S. Highway 78/Arkadelphia Road during the interim. Repairs were completed by Brasfield & Gorrie in just 38 days after demolition of the damaged bridge was complete. Former governor Don Siegelman, Representative Spencer Bachus and state Department of Transportation director Paul Bowlin attended its rededication in February 2002. The new bridge has been dedicated as the Tim Dyson Memorial Bridge.

On October 21, 2004, a tractor trailer again wrecked igniting 9,000 gallons of diesel fuel resulting in severe damage and the closure of the connecting ramp from I-20/I-59 northeast with I-65 north. The driver Bryan Gerald rolled over as a result of speeding on the connector ramp connecting I-65 north with I-20/I-59 southwest. The bridge would remain closed until December 4, 2004, resulting in motorists being detoured to Highway 78/Arkadelphia Road during the interim. Repairs were completed by Brasfield & Gorrie and the White Morris Group just five weeks after demolition of the damaged bridge was complete.

In June 2006, partly in response to the growing List of interstate accidents involving dropped steel loads, the Alabama Department of Transportation announced increased enforcement of I-459 as the alternate truck route for through-trucks transferring from I-20/59 to I-65. Mike Coppage, director of the Alabama Department of Public Safety said that he would instruct State Troopers to check bills of lading and direct truckers to the proper routes, but that his department was stretched too thin to enforce the routes effectively. The city of Birmingham, which has its own ordinance to keep trucks off the Interstate bridge, stopped enforcing truck routes in 1995 on the advice of city attorneys. Bessemer and other cities do actively enforce the regulations.

In March 2007, Governor Bob Riley ordered that the speed limit be lowered from 60 MPH to 50 MPH through Malfunction Junction. This affected Interstate 65 from University Boulevard to Finley Avenue and I-20/59 from Arkadelphia Road to milemarker 127, located between the Elton B. Stephens Expressway and Tallapoosa Street.[1]

During construction of new ramps and lanes as part of the bridge replacement project for the I-20/59 downtown viaduct in April 2018, a delayed construction repair led to the extended closure of part of the junction, requiring detours.

On October 1, 2020 a truck overturned at the junction, spilling 5,000 gallons of sodium hydrosulfite. The driver was mildly injured. Both interstates were closed as crews began cleanup operations. Five days later a car hauler ran off of the I-65 ramp onto I-20/59, killing the driver. 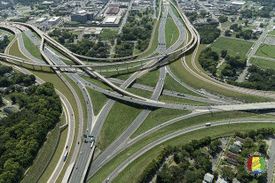 In 2016 work was begun to add more ramps and bridges to the interchange with the goal of improving traffic flow and providing better access to the renovated section of I-20/I-59.

A new directional sign approaching the junction from the east was installed in May 2018. It mistakenly instructed drivers to proceed through the center lanes for "65 W & 59 S" toward Tuscaloosa and to merge right for "20 N" toward Huntsville. The error was corrected by covering and replacing the sign soon afterward.

Phase 2 of the downtown bridge replacement project, including new ramps connecting to 11th Avenue North and 17th Street North, was completed in August 2018.