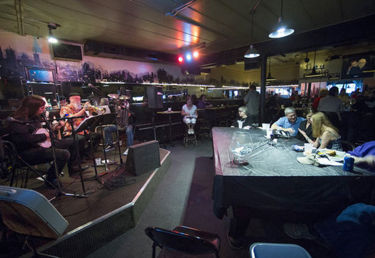 August 2013 view of Marty's by Frank Couch for al.com.

Marty's PM is a bar, grill and music club opened by Marty Eagle at 1813 10th Court South in Five Points South. Eagle owned the Eagle's Nest in Lakeview before moving his operation to Five Points South in 1993.

The club is known for its free-ranging open mic nights and its support for up-and-coming local bands, including blues, jazz, and traditional music alongside rock and pop. The kitchen was known for its late-night burgers. Marty was known for his gruff charm and his simple rule, "Be Nice or Be Gone", a philosophy which he promulgated in a mail-order video called "How to Find Happiness Owning a Bar".

Marty's also has pool tables, a lending library and a sweeping mural painted in 2003 by Richard DiMarzo. Eagle died in January 2013. The bar was operated for the next few months by his long-time partner, Kay Ferguson, and later sold to Phillip and Marsha Mims. The couple renovated the interior, added a covered patio, and updated the food menu.