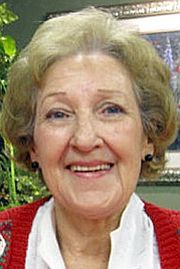 Mary Kay Petet Beard (born January 22, 1945 in Springfield, Missouri; died April 17, 2016 in Jefferson City, Missouri) was a former bank robber and the founder of the Angel Tree ministry, an international effort to benefit the children of prison inmates.

Mary Kay was the daughter of Cleveland Francis and Mamie Grace (Crawford) Petet of Missouri. She grew up in the midwest, the fifth of nine children in the family of a devoted Christian mother and an alcoholic and abusive father. She patterned her early life to be like her mother, graduating at the top of her class at Eldon High School at 15 and completing nursing school in record time. A brief marriage that produced two children ended in divorce.

Later she met Paul Mahaffey, a music promoter and gambler, as well as bank robber and safecracker. She married him nine days after they met and gradually fell into his life of crime. At first she just assisted with gambling cheats, but soon she was holding up banks herself and even staged a prison break to free her husband. Paul abandoned her during a long hospital stay, but she continued the criminal life, partnering with two of her husband's former associates. The stakes continued to climb and by 1972 she was on the FBI's most-wanted list and had a contract on her life from crossing the mafia in a diamond heist.

She was arrested by the FBI in Peoria, Illinois in June 1972 and charged with 11 federal and 35 state counts of grand larceny and armed robbery. She did time at the Tutwiler Prison for Women in Wetumpka, from 1972 to 1978. While in prison she started attending church services and reading the Bible. The other states that had outstanding warrants eventually dropped the charges and she was unexpectedly paroled after serving only six years. Her success with classes at Tutwiler earned her a scholarship to Auburn University, where she completed her bachelor's degree and a master of arts in counseling.

After graduating in 1982 she joined Prison Fellowship, a Virginia-based national prison ministry founded by Chuck Colson, where she was asked to serve as Alabama State Director. She met and married former prisoner Don Beard on January 29, 1984, exchanging vows in the chapel at Tutwiler Prison.

Prison Fellowship asked Beard to create a Christmas program. She disdained the usual practice of bringing small gifts to inmates because she had seen that often, the women would turn around and give those tubes of toothpaste and bottles of shampoo to their children, who otherwise would get nothing for Christmas. Instead, she created the "Angel Tree". She placed a Christmas tree in two shopping malls with the names and ages of prisoner's children. The ministry delivered gifts to over 550 children that first year and grew to serve over 6.3 million children around the world.

She and her husband founded several other social service programs, including the Shepherd's Fold halfway house in West End, the Encourager Center for Biblical Counseling in Houston, and Encourager Ministries and Impact Family Counseling in Birmingham. She managed those ministries from her home in Center Point, and was an active member and staff missionary at Altadena Valley Presbyterian Church. Her husband, Don, died in 2006.

Beard was named the "Resident of the Year" by the Birmingham East Rotary Club in 2006. In 2014 she moved to a nursing home in her home state of Missouri. She died there in April 2016. She was survived by three children, 10 grandchildren and 14 great-grandchildren.