This article is about the legislator. For other uses, see Mary Moore (disambiguation). 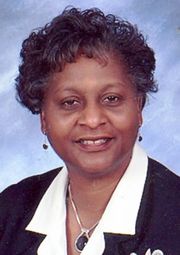 Mary Moore (born July 23, 1948 in Birmingham) is a member of the Alabama House of Representatives representing District 59.

In the 2002 general election, Moore challenged one-term incumbent William Parker for the District 59 seat in the State Legislature. She was re-elected in 2006 and 2010.

Moore has been criticized for making controversial statements. In 2012 she used the term "retarded" to insult Birmingham News education reporter Marie Leech. In 2013 she described the Alabama Accountability Act as establishing "the new confederacy, where a bunch of white men are now going to take over black schools."

In 2016, Moore was one of the lead proponents in the Jefferson County Legislative Delegation for amending the Mayor-Council Act to give the Mayor of Birmingham additional powers.

Moore is a member of Evergreen Missionary Baptist Church. She has one son, Michael.