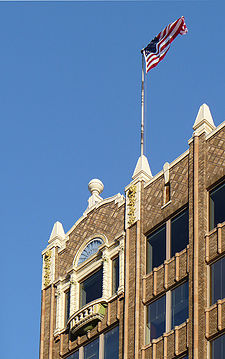 Detail of the Massey Building in April 2007

Massey Building (formerly the Bankers Mortgage-Bond Building or Bankers Bond Building) is a 10-story office building located on the northeast corner of Block 85, southwest of the intersection of 3rd Avenue North and 21st Street North.

Richard Massey commissioned the 65,000-square foot tower in 1925. It was owned jointly by him and by his firm, the Bankers Mortgage-Bond Company. The building was managed by McConnell, White & Terry.

Architect William Leslie Welton drew inspiration from Spain's Moorish architecture. The building's terra-cotta ornamentation features spiral-fluted columns and pointed elements atop the parapet meant to mimic minarets. Escutcheons over the recessed archway entrances on each facade bear the builder's initial "M". The reinforced concrete building with brick veneer was constructed by the Smallman-Brice Construction Company for approximately $500,000. The office building was renamed for Massey when his business failed during the Great Depression. 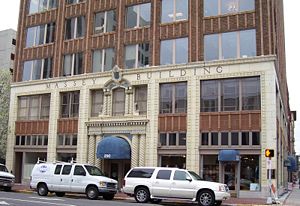 Ground floor of the Massey Building in March 2007

The building underwent a major renovation in 1986. Currently the Massey Building is primarily leased to attorneys, with small retail spaces located on the first floor.

In 2012 the entire northeast corner of the first floor was converted into a branch for Iberia Bank. The building is currently owned by brothers Leo and Ed Ticheli.