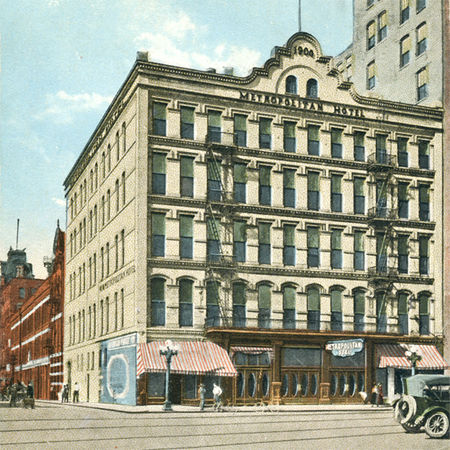 The Metropolitan Hotel and Cafe was a 103-room hotel located at 8-14 20th Street North next to the Union Station on the corner of Morris Avenue in downtown Birmingham. The hotel lot was purchased in 1884 by Moore, Moore & Handley and the hotel opened in 1886.

In 1892 the hotel was purchased by Emil Lesser, who operated it until at least 1904. In 1899 it was advertised as "the oldest hotel in the city," and offered a "first-class restaurant" open day and night, and "well-furnished, comfortable rooms" from 50 cents and up.

The Metropolitan was destroyed by a fire caused by an exploding gas boiler in the hotel's basement on February 23, 1900. The guests were all evacuated to safety, but an African American dishwasher named "Tuscaloosa" was lost to the flames. The property was insured and the owners rebuilt the hotel, which reopened by the end of the year. The new Metropolitan hotel featured 160 rooms furnished with all modern improvements, including "Perfection" mattresses. Restaurateur Paul Gilardoni, and later, Charles Pantaze, operated the Metropolitan Cafe. The property later sold for $175,000.

In 1910 the hotel offered rooms for $1.00 and up on the "European plan" (no meals). Noted hotel manager Robert Meyer purchased the hotel before 1920.