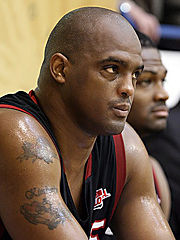 After graduating from Jackson-Olin High School, Ansley played collegiately at the University of Alabama from 1985 to 1989.

Ansley was selected by the Orlando Magic in the 2nd round (37th overall) of the 1989 NBA Draft. His rookie season was his best year in the NBA. He appeared in 72 games for the Magic and averaged 8.7 points and 5 rebounds per game. He was released in 1991 and signed that September with the Milwaukee Bucks, but was waived two months later. Ansley returned to Alabama as a member of the Birmingham Bandits in 1991, before returning to the NBA as a member of the Philadelphia 76ers in December of that year.

Dropped by the Sixers in 1992, Ansley signed a 10-day contract with the Charlotte Hornets before going to Europe. He played for Unicaja-Mayoral in Málaga, Spain for the next several seasons, winning the Finals MVP award in the Asociación de Clubs de Baloncesto in 1995. He has also played in Israel and Turkey, and most recently for Sportino Inowrocław of the Polish Basketball League.