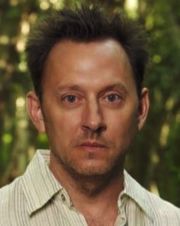 Michael Emerson (born September 7, 1954 in Cedar Rapids, Iowa) is a stage and television actor best known for his role as Benjamin Linus on Lost.

Emerson grew up in Toledo, Iowa and attended South Tama County High School. He graduated in 1976 from Drake University in Des Moines with a degree in theater and art. After moving to New York City, he took jobs as a freelance illustrator while looking unsuccessfully for acting roles. He married and moved to Jacksonville, Florida where he taught theater at Flagler College and performed in local productions.

In 1993 Emerson enrolled in the Master of Fine Arts program conducted by the University of Alabama through the Alabama Shakespeare Festival in Montgomery, graduating in 1995. He met his second wife, Carrie Preston, while playing Rosencrantz in an ASF production of "Hamlet". After graduating, Emerson appeared in an ASF showcase in New York and remained in that city to resume his career. His break came in 1997 when he starred as the title character in Moises Kaufman's "Gross Indecency: The Trials of Oscar Wilde" off-Broadway. That led to additional stage roles in "Le Misanthrope", "The Iceman Cometh", "Give Me Your Answer, Do!" and "Hedda Gabler". He married Preston in 1998.

Emerson also gained notice as a character actor in television and film. He won an Emmy in 2001 for his portrayal of serial killer William Hinks in "The Practice", and played the role of Zep Hindle in the 2004 horror feature "Saw". That same year he played a butler alongside his wife in the comedy "Straight-Jacket".

Emerson debuted as Benjamin Linus on the second season of the hit series "Lost" in 2006 and became a regular cast member in the third season. His popular character remained with the series through the end of its run in 2010. His wife, Carrie, played his character's mother, Emily Linus, in a flashback sequence. He was nominated for Emmys in 2007 and 2008 before winning in 2009. He was also nominated that year for a Golden Globe.

In 2008 Emerson and Preston both appeared in the film "Ready? OK!", playing neighbors. In 2011 he began playing Harold Finch on the CBS series "Person of Interest".