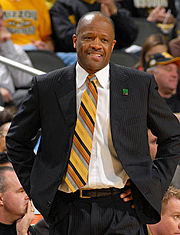 Anderson grew up in Birmingham, where he attended Jackson-Olin High School in the Ensley-Pratt City neighborhood, leading the Mustangs to the semifinals of the Alabama state basketball tournament and averaging 19 points per game in his junior and senior years and winning all-state honors. Anderson moved on to Jefferson State Community College in Birmingham, where he was spotted by an opposing coach named Nolan Richardson. When Richardson was offered the coaching job at the University of Tulsa, he quickly offered Anderson a scholarship. In Anderson's two years playing for the Golden Hurricane he averaged 12 points a game, and the team won an NIT title and gained an NCAA tournament berth.

After graduating in 1982, Anderson went into substitute teaching while looking for a coaching job. Richardson bright him on to Tulsa's staff as a volunteer assistant. When Richardson moved on to the University of Arkansas, he brought Anderson along as an assistant for a 14-year stint, the last five as assistant head coach. During that time, the Razorbacks won three Southwest Conference championships, two Southeastern Conference titles, three appearances in the Final Four, a national championship 1994 and a second-place finish in 1995.

During Anderson's tenure at UAB, the Blazers made three appearances in the NCAA Men's Basketball Tournament and one appearance in the National Invitation Tournament. In 2004, the Blazers advanced to the Sweet Sixteen by virtue of a 76-75 upset victory over the University of Kentucky, the tournament's overall #1 seed. UAB ended the season ranked 23rd in the USA Today coaches' poll, the first time the team ever ended the season with a ranking. Anderson was named Conference USA Coach of the Year.

Anderson was hired as the head coach at the University of Missouri on March 26, 2006. In five seasons there he took three teams to the NCAA tournament, with the 2008-2009 squad reaching the Elite Eight. He left Missouri with a 111-57 overall record to accept the head coaching job at Arkansas.

Anderson and his wife, Marcheita, have three children: Darcheita, Michael Jr, and Yvonne; and one grandchild.