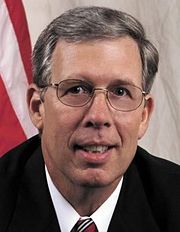 Hale grew up in Woodlawn. He graduated in 1969 from Woodlawn High School, and played for the Woodlawn Colonels football team. He earned a bachelor of science in criminal justice from UAB in 1987. He is the nephew of former Sheriff Mel Bailey.

He started his law enforcement career with the Homewood Police Department in 1973. In 1976 he transferred to the Jefferson County Sheriff's Department, where he has spent his career having commanded, at various times, every division of the department. He was also the Chief of Police for Pell City (2000-2002) and the director of security for St Vincent's Hospital in Birmingham.

Hale, running as a Democrat, first took office in 1999 following a seeming 37-vote victory in the 1998 general election against incumbent Jim Woodward. Woodward demanded a recount, which was litigated for nearly a year, during which Hale served as Sheriff. In November the Alabama Supreme Court determined that Woodward had won the election by a 6-vote margin and Hale stepped aside.

Hale successfully challenged Woodward in the 2002 Republican primary and went on to beat Johnnie Johnson Jr in the 2002 general election. He won re-election again, this time over Ron McGuffie in the 2006 election. He defeated Woodward again in the 2010 primary elections and Democrat Wallace Anger in 2014. In the 2018 election Sergeant Mark Pettway, running as a Democrat, successfully challenged Hale for reelection, winning by a 51.5/48.5 margin.

During his two decades as sheriff, Hale has initiated several popular and visible enforcement programs such as the Citizen's Training Academy, the Sheriff's Office School Resource Officer Division, and a "Cell Phone Posse" to involve more private citizens in crime investigation efforts. He also created the Metro Area Crime Center which coordinates the investigative resources of several area police departments. Hale's tenure also saw the Sheriff's Department released in 2017 from a 35-year-old consent decree forcing it to document efforts to hire and promote African-American and female officers.

He also built a strong record as a lobbyist, winning large budget increases from the Jefferson County Commission and succeeding in getting several laws strengthened, including one making it a felony for convicted sex offenders to break registration requirements after their sentences are completed.

Hale has been married since 1971 to the former Dianna Gilmore. The couple have three sons and seven grandchildren. They are residents of the Clay-Trussville area and attend the Church at Brook Hills. He is a member of the B. P. O. Elks, Lodge #79 and the Fraternal Order of Eagles Aerie 972, a Master Mason, Scottish Rite, Eastern Star, and Shrine.