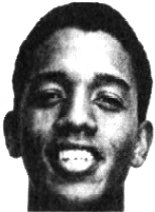 Born in Birmingham, Johnston grew up in Tampa and played at Glades Central High School, where he averaged 13 points per game befoe graduating in 1984. Division II University of Tampa signed him to a scholarship. After college, he was set to continue his career overseas when the newly-formed Miami Heat drafted him as a surprise third-round pick in the 1988 NBA draft.

Johnston was cut from the Heat roster in training camp, with coaches frustrated by ambivalent work ethic. He signed instead with the CBA's Quad City Thunder in Rock Island, Illinois. There he averaged 11.6 points and 3.9 rebounds in 22 games. He was picked up briefly by the Utah Jazz and played 13 minutes in 6 games during December 1989 before being cut again and returning to the CBA. He was signed in January 1990 by the Portland Trail Blazers, but did not see game action until an off-court injury to center Ramon Ramos. He made 15 appearances for Portland, with a career-high 8 points scored against the Orlando Magic on March 13.