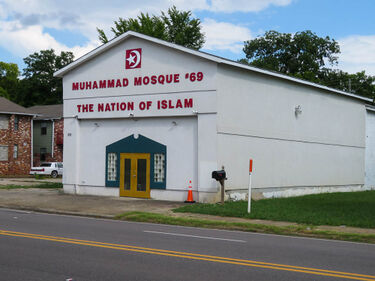 The Nation of Islam (NOI) is an African American political and religious movement based in Chicago, Illinois. It was founded in Detroit, Michigan in 1930 by Wallace Fard Muhammad. The group, with 20,000-50,000 members across the United States, promotes African American economic and political self-sufficiency. Its sometimes radical tenets have led critics to label the movement as a hate group.

After Fard's disappearance and death in the early 1930s, his successor Elijah Muhammad, styled himself as "Messenger of Allah to the Lost Found Nation of Islam in the Wilderness of North America," and led the community for the next four decades, increasing its visibility and influence. Under his leadership, the group moved its base to Chicago and established individual congregations, known collectively as Muhammad’s Temples of Islam, across the country. One of those, organized by Chester McNutt, was active in Birmingham by the late 1950s and was reported to have about 100 members.

Muhammad was imprisoned in 1942 for preaching against military service. He took the opportunity to implement a successful recruitment effort among prisoners. One of those recruits, Malcolm Little, took the name Malcolm X. After his release he became a national spokesman for the movement, and drew large numbers to his fiery speeches. Malcolm broke with the group a year before his death in 1965. After Elijah Muhammad's death in 1975 his son, Warith Deen Mohammed was named "Supreme Minister" and shepherded the group away from its Black nationalist roots toward closer communion with Sunni Islam and decentralization.

Warith Deen Mohammed's rival, Louis Farrakhan, reformed the Nation of Islam along its older lines and won over control of numerous congregations. By 1985, with financial backing from Libya's Islamic Call Society, Farrakhan was recognized as the head of the renewed Nation of Islam. He led the group's "Million Man March" in Washington D.C. in 1995 and extended ties to foreign groups and other U.S. minorities. In 2010 Farrakhan began adopting the practices of the Church of Scientology into the Nation of Islam.