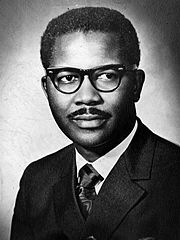 Nelson H. Smith, Jr (born 1930 in Brewton, Monroe County; died September 10, 2006 in Birmingham) was the pastor of New Pilgrim Baptist Church in Birmingham from 1953 until his death and a leader in the Alabama Christian Movement for Human Rights (ACMHR) and later in the Southern Christian Leadership Conference (SCLC).

Born the son of a preacher Nelson Smith, Sr and his wife Lillie in Brewton, Smith grew up in Monroeville and attended Bethlehem Industry Academy High School and the Monroe County Baptist Academy. Like his later Birmingham colleagues Fred Shuttlesworth and T. L. Lane, he studied theology at Selma University. His sister, Fannie Smith Motley, was the first African American to graduate from Spring Hill College in 1956.

Throughout his career Smith was known as "Fireball" for his dynamic and often poetic oratory, rehearsed at length to perfect cadence and gestures. After graduating he preached in revivals across the South, making news for his ringing oratory delivered at a revival for Wheat Street Baptist Church in 1950s Atlanta. His first pastorate was at the Christian Union Baptist Church in Mobile (1948-49). He spent the next year at Union Baptist Church in Clanton, then two years at Tabernacle Baptist Church in Beatrice, and a short term at Shiloh Baptist Church in Montevallo before finding a home at New Pilgrim in 1953. During most of his time there the congregation exceeded 1,200 members. Smith advocated strong leadership from the pulpit, characterizing the ideal congregation as a theocracy rather than a democracy.

Long frustrated by the indignities of Birmingham's complete racial segregation, Smith preached for the advancement of African Americans. He was a charter member in the ACMHR when it formed in 1956. He assisted Fred Shuttlesworth as the organization's secretary and hosted numerous meetings at his church, which attracted a young, dynamic congregation. He approached Miles College student body president Frank Dukes and cultivated support for the ACMHR's non-violent aims on campus. Smith co-signed most of the group's external communications and led marches during the tumultuous Birmingham Campaign in the Spring of 1963. In 1964 Smith headed Birmingham's first SCLC chapter, representing a break between that organization and the ACMHR.

Throughout his ministry, Smith preached the importance of higher education and personal financial management. He founded the New Pilgrim Credit Union in 1965 and led his church in the development of a bookstore and the New Pilgrim Towers apartments.

Smith died at home in 2006 after a long illness. He was survived by his wife, Leslie, and four children. The Kneeling ministers statue in Kelly Ingram Park depicts him alongside A. D. King and John Porter, kneeling in prayer at the culmination of the Palm Sunday March on April 7, 1963.