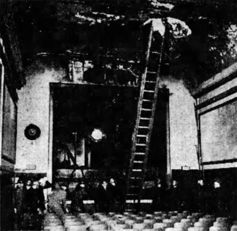 The Newmar originally opened in December 10, 1948 in the building that formerly housed the Capitol Theatre at 1911 2nd Avenue North. The $45,000 Art Deco style remodeling was designed by Burnham & Echols architects. The stage, lobby and restrooms were rebuilt along with new sound and projection, and heating and air-conditioning equipment. All the interior walls were replastered and painted in soft hues that blended with the new carpets. The Dixie Neon Company fabricated the new marquee.

The Newmar showed second-run "A" features at reduced prices. The opening night picture was "Abbott and Costello Meet Frankenstein". The manager was Hampton Lane.

On July 31, 1949 Waters converted the Newmar into an "Art Theater". The new format launched with a screening of Roberto Rosselini's "Paisan". Waters expressed confidence, "that Birmingham will support these finer motion pictures, which people in other cities are enjoying, and which never before have played regularly in Birmingham." The experiment was short-lived, and the Newmar returned to playing adventures and comedy films within a year or two.

On April 19, 1951 a small fire broke out in the theater, destroying the screen and damaging three rows of seats. The last film screened was "Bitter Rice" starring Silvana Mangano. Though the film had been described as "hot" and "flaming", fire officials did not give credence to there being any connection. The theater reopened after undertaking approximately $5,000 in repairs. In April 1953 a police officer's automatic pistol went off accidentally when he stood to allow a woman to pass in the theater. A male patron suffered a minor injury and was treated at Jefferson-Hillman Hospital.

Within a few years the Newmar moved next door into the former Strand Theatre at 1913–1915 2nd Avenue. The second Newmar closed in September 1959 when the Strand was reopened as an Acme Theater affiliate.