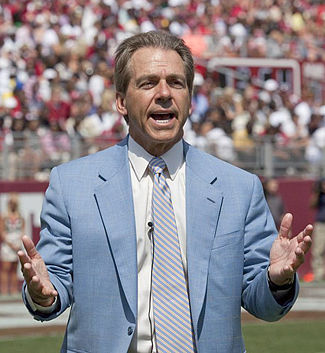 Nicholas Lou Saban (born October 31, 1951 in Fairmont, West Virginia) is the head coach of the Alabama Crimson Tide, having accepted the job on January 3, 2007. He was formerly the head coach of the National Football League's Miami Dolphins. Prior to the Dolphins, Saban held head coaching jobs at LSU and Michigan State. Under his leadership in the 2003 LSU won the BCS National Championship and Saban was selected both the NCAA Coach of the Year by the Associated Press and the Eddie Robinson Coach of the Year by the FWAA. He is married to Terry Saban from West Virginia, and has two children.

Saban previously made stops in the NFL as a defensive assistant under Bill Belichick for the Cleveland Browns and Jerry Glanville for the Houston Oilers. Collegiately, he held various coaching positions at Syracuse University, West Virginia University, Ohio State, Navy, and his alma mater of Kent State University. His first head coaching job was at the University of Toledo.

From 1995 to 1999, Saban was the head coach at Michigan State University. He took over the program while it was under investigation by the NCAA for infractions committed under previous coach George Perles. Penalties assessed in 1996 for four seasons included scholarship reductions, official visit reductions for recruits, and forfeiting all five wins from the 1994 season.

He was the first Michigan State head coach to defeat Michigan in his first attempt, a 28-25 victory over a #7-ranked Wolverines squad at home on November 4, 1995.

Another high point was on November 7, 1998, when his unranked Spartans defeated the #1 ranked Ohio State on the road.

Saban arrived at LSU as the school was in the midst of a slide. After some success in the mid-to-late 1980's with Mike Archer, LSU football struggled greatly starting in the 1989 season. From 1989 until Saban arrived in 2000, LSU had eight losing seasons in the previous eleven years.

However, the Tigers were not void of talent. Saban's predecessor, Gerry Dinardo, had recruited well, and the team was rich with talent when Saban arrived. The good news for Saban was that he inherited a team rich with talent.

LSU quickly rebounded with Saban at the helm. In 2000, the Tigers went 8-4 and won the Peach Bowl. The season marked a major turnaround, as Saban and his LSU Tigers pulled off a big upset of Tennessee, and beat rival Ole Miss in Oxford. Also, the Alabama Crimson Tide had their 31-year winning streak in Tiger Stadium snapped when the Bayou Bengals held on to defeat the Tide 30-28.

In 2001, Saban effectively became a coaching legend on the Bayou, as he led LSU to a 10-3 record, including an SEC Championship and a Sugar Bowl victory. After a disappointing loss to Eli Manning and the Ole Miss Rebels, the Tigers and quarterback Rohan Davey went on a tear. They closed out the year with six straight wins, including a major upset of Tennessee in the 2001 SEC Championship Game and a 47-34 win over Illinois in the 2002 Sugar Bowl. It was the first outright SEC championship for LSU since 1986, and the first time the Tigers had won the Sugar Bowl since 1985.

2002 was a bit of a disappointment after the great 2001 season. The season opened with a 26-8 thrashing at the hands of Virginia Tech, but the Tigers would rebound to win their next six straight. Unfortunately, quarterback Matt Mauck, who replaced the departed Rohan Davey, went down for the year with an injury, and the Tigers limped to the finish of the season. LSU lost four of their last six to close the season, including a 35-20 loss to Texas in the Cotton Bowl, and finished 9-5.

Disappointment, however, would not be a part of the 2003 season. With quarterback Matt Mauck healthy, the Tigers jumped out of the gate 5-0, including a 17-10 win in Tiger Stadium over the defending SEC champion Georgia Bulldogs. However, the sixth game of the season saw the Tigers stumble, as they lost at home to the Florida Gators, 19-7, who had a true freshman quarterback. That would, however, be the last stumble of the season for LSU. From the disappointing loss, LSU dominated, winning seven straight, including the SEC Championship Game over Georgia. They were selected to play the Oklahoma Sooners in the Sugar Bowl, which was the site of the BCS Championship Game. In a great game with the BCS national championship on the line, the Tigers prevailed with a strong defense and an efficient offense, 21-14. LSU was national champions for only the second time in school history, and for the first time since Paul Dietzel and Billy Cannon led the Tigers to the national championship in 1958.

In 2004, Saban and LSU sought to defend their national championship. However, LSU lost to the Auburn Tigers 10-9 in Jordan-Hare Stadium on a controversial call at the end of regulation, and the defense was effectively over. Still, LSU played well, and won their last six regular season games, including wins over rivals Arkansas and Ole Miss. LSU finished the regular season 9-2, and faced the Iowa Hawkeyes in the Capital One Bowl. With victory a certainty for Saban and the Tigers, leading 25-24 on the last play of regulation, Iowa quarterback Drew Tate heaved a Hail Mary that was caught and ran in the for the game-winning score, and the Tigers lost in a heartbreaker, 30-25.

At the end of the 2004 season, Saban left LSU to coach the Miami Dolphins, leaving a strong LSU program in place for successor coach Les Miles.

Nick Saban accepted the job of head coach for the Miami Dolphins on Christmas Day, 2004, replacing Interim Head Coach Jim Bates. Bates had lead the Dolphins to a 3-4 record during the last seven games of the 2004 season after previous head coach Dave Wannstedt resigned with the Dolphins' record at 1-8.

Coming into the job, the Miami Dolphins held the second overall pick in the 2005 NFL Draft. Saban used this pick to select Auburn University standout running back Ronnie Brown. Saban made news during his first offseason by bringing back troubled star running back Ricky Williams after Williams had retired the previous season in face of NFL drug infractions. The Miami Dolphins did well during the 2005 season, finishing with a 9-7 record, and closing out the season with a six-game winning streak.

During the 2006 offseason, Saban made several changes to the Dolphins roster. He traded a 2nd round pick to the Minnesota Vikings in exchange for former star quarterback Daunte Culpepper. The deal was considered somewhat controversial because Culpepper had suffered a season-ending knee injury earlier that year, which sometimes takes up to 14 months to fully recover from. Despite this, the move was widely considered a good one. In addition, he also traded a 2007 sixth round pick to the Detroit Lions for troubled quarterback Joey Harrington. Saban decided to release Junior Sea] and long time Dolphin's cornerback Sam Madison, but in return, signed Will Allen, previously of the New York Giants, and Keith Newman, of the Minnesota Vikings. He also signed several other players including offensive linemen L.J. Shelton and Bennie Anderson, fullback Fred Beasley, wide receiver Kelly Campbell and defensive backs Deke Cooper and Renaldo Hill. In the 2006 NFL Draft the Miami Dolphins selected Jason Allen of the University of Tennessee with the 16th overall pick. The Dolphins, an early favorite to make the playoffs during the 2006 season, had what can only be considered a disappointing season marred by a revolving door of Quarterbacks, starting with Daunte Culpepper, then Joey Harrington, and finally Cleo Lemon to finish the season.

Many in the Dolphins' organization were said to be glad of Saban's departure, having complained of his authoritative ways [1] although some were upset of his repeated denials up to the day of his acceptance.[2].

After repeated denials that he had any interest in leaving the Dolphins and taking the vacant coaching job at Alabama, Saban announced on January 3, 2007 that he had accepted an 8-year, $32 million offer to be their new head coach. That same day, Saban and his family arrived at the airport in Tuscaloosa, where he was greeted by hundreds of screaming Alabama fans. The Tuscaloosa News put out a special edition trumpeting the hiring, with the blaring headline: "SABAN TIME." According to Don Banks of SI.com, Saban "has told some peers within the league that coaching at Alabama was always his dream job." Saban, who is 2-3 versus Auburn's head coach Tommy Tuberville, was expected to restore parity to what had been a one-sided rivalry with the Auburn Tigers.

In his first season, the Tide went 7-6, showing marked improvement in some facets of the game, such as play calling and clock management, but also seeing inconsistent performances from skill positions and off-field disciplinary troubles. An early win at home against the #16 Arkansas Razorbacks on national television was followed by an overtime loss at home to #21 Georgia. Three straight victories followed, including a home win against #22 Tennessee, but losses to #3-ranked LSU and #23-ranked Mississippi State were followed by a surprising upset loss to Louisiana-Monroe at homecoming, and then a sixth-straight Iron Bowl defeat, leaving Tide fans a bitter ending to the season.

In 2008, the Tide rolled to a perfect regular season with wins over #9 Clemson, #3 Georgia, and #15 LSU. Breaking the six-game losing streak to Auburn at home with a 36-0 shutout capped the season and set the stage for a #1 vs #2 showdown in the SEC Championship Game. Florida out-dueled the Tide for a 31-20 win and a slot on the BCS National Championship Game and Alabama accepted a Sugar Bowl invitation to meet the Utah Utes in New Orleans, which they would lose 31-17. Saban was named the Associated Press College Football Coach of the Year.

In 2009, the Tide finished 14–0 and won the SEC Championship and the BCS National Championship. They were 12-0 in the regular season. The team faced Florida in the SEC Championship Game, and defeated the Gators 32–13 in a rematch of the previous year's championship. Alabama then traveled to Pasadena and defeated Texas, 37-21, in the 2010 BCS National Championship Game at the Rose Bowl. For his successes, Saban was picked to receive the inaugural Bobby Bowden Collegiate Coach of the Year Award given by the Over the Mountain Touchdown Club and the Alabama Sports Foundation.

Saban reclaimed the title of highest-paid college football coach in 2020, with a reported $9.3 million in total annual compensation.