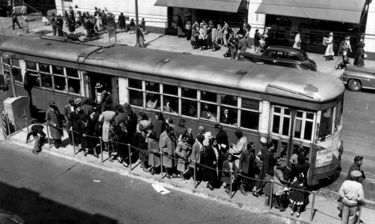 The No. 6 Pratt-Ensley streetcar line (formerly the North Ensley streetcar line) was a continuation of service which originated as the Ensley Railway, a steam-powered dummy line connecting Ensley to Birmingham. The route was consolidated into the Birmingham Railway and Electric Company in May 1890 and converted to electric cars in 1897.

From 1888 to 1902 the line made use of the Ensley Railway Barn at 10th Avenue North and 13th Street. In 1913 the name of the route was changed to highlight its service to Pratt City and further distinguish it from the No. 7 Owenton-Ensley streetcar line. Service was suspended for a few years in the early 1930s due to the poor condition of the East Thomas Trestle over Village Creek. Only after being issued a court order did the company repair the trestle and resume service. With minor exceptions, the route remained unchanged until service was ended on December 10, 1950.

From the corner of 1st Avenue North and 19th Street in downtown Birmingham the No. 6 line proceeded west to 17th Street and north to 8th Avenue North before heading west on dedicated right-of-way. The route crossed under 11th Court North near the present Malfunction Junction and continued through East Thomas Park and over U. S. Highway 78 and Village Creek on bridges.

The single track diverged into sidings for two stops in Pratt City and continued on dedicated right-of-way to another crossing over Village Creek before reaching Avenue E in northeast Ensley. It continued as far as 20th Street before looping down to Avenue F and returning north on 19th Street for service back to Birmingham.

In 1927 the downtown terminus was moved two blocks north to 3rd Avenue North and 19th Street.