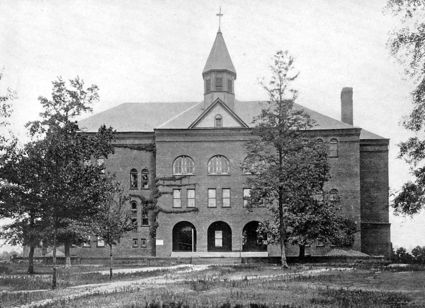 The "Old Main", from Views of Birmingham Alabama: With A Glimpse at Some of The Natural Resources of the Birmingham District and the Industries Based Thereon (1908) New York: Isadore Newman & Son Bankers

1888 rendering of the proposed campus

The Main Building or "Old Main" was the administration building of Howard College in East Lake, before the campus was moved to Shades Valley. It was the first "permanent" building for the campus, which was previously dotted with dormitories and meeting halls built of wood framing without heating or plumbing. The building faced a park-like "quad" opening onto 2nd Avenue South (then called Underwood Avenue), between 77th and 78th Street South.

An illustration of the proposed building, as designed by L. B. Wheeler of New York and John Sutcliffe of Birmingham in what they described as an "American Renaissance" style with dwarf columns and round-arched openings, was displayed during commencement exercises at East Lake Park on June 10, 1888. The main building was to have been connected to a similarly-sized dormitory and other buildings by covered arcades.

A contract for constructing the foundation of the main building was awarded to Allen and Taylor that year. The entire three-story building, measuring 179 feet long by 68 feet wide, was expected to cost $50,000. As designed, the pressed-brick exterior was to be trimmed with red and other marbles, while the interiors were finished in hardwood with marble-floored corridors and inset slate slabs for chalkboards. Progress was slowed by the slow arrival of promised funds. D. I. Purser, the college's financial agent, wrote that "There are seventy-five men in this city who say they will give, but they all want to be the last." It took president Benjamin Franklin Riley's threats to move the campus to Florence to stir donors to action. The college mortgaged the 64-acre campus to obtain the bonds required to resume construction on August 18, 1890 with M. T. Richards as contractor. The cornerstone was laid on October 29 of that year, holding various mementoes in its cavity.

The result was that, as built, at a total cost of $65,000, the Main Building was much less ornate than in the original design, with fewer opening and decoration to relieve its expanses of plain brick, moulded from clay dug on site. The interior woodwork was of Alabama pine rather than hardwood. The structure contained six classrooms, each with a professor's room attached, as well as the president's office suite, a 30x30-foot library room, an 800-seat chapel, two large meeting rooms to be used by the Franklin and Philomathian Societies, and a chemical laboratory. A boiler provided steam heating the the building. Since East Lake had no sanitary sewers, the only toilets in the building were four seats in a third floor closet above a shaft leading to a cess pool in the basement. The rest of the campus "went to Congress" in an improvised structure erected over on open drainage ditch on the southwest corner of the campus.

The first classes transferred to the new building in late May 1891 and the chapel hosted its first commencement exercises on June 7. As the campus was further developed, the "Old Main" came to command a park-like academic quad to the north of the building. An old oak tree, dubbed "Sherman Oak" in 1915, became a landmark on campus. At some point the building's central tower and gable were removed, further simplifying its roof-line.

Howard College moved to an entirely new campus in Shades Valley in the 1950s. The "Old Main" was vacated when the new campus opened in 1957. Meanwhile, residents of East Lake were faced with the loss of a major institution, which some considered a "disastrous" turn of events. An Old College Station Betterment Club opposed plans to sell the former campus and its buildings for redevelopment, hoping instead to re-use them as a "center of culture and education" with the assistance of the Alabama Baptist State Convention. Those efforts were followed by those of the East End Chamber of Commerce, which considered the possibility of re-using the campus gymnasium as a community center, its newer dormitories for a convalescent home, and its classroom buildings for a school for medical technicians. A group of developers proposed constructing a modern shopping center with stores and offices bordering three sides of a spacious parking area facing 2nd Avenue South. The southern half of the campus, with the gymnasium and Berry Field, could be sold for recreational uses and/or redeveloped with new apartment buildings. Though not indicated in the drawings from Caldwell & Elliott, the developers promised that the historic Sherman Oak could be preserved in their proposal. They did purchase 38 acres of the site for $500,000, but their proposal for a shopping center was opposed by the East End Chamber of Commerce, made up of business owners operating mainly on 1st Avenue North.

The "Old Main" building was torn down in 1960 and the site eventually redeveloped for apartments.