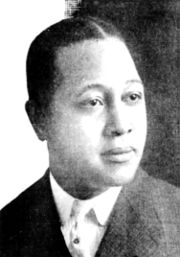 Oscar Adams Sr (born 1888; died 1945) was a minister in the African Methodist Episcopal Zion church and the publisher of the Birmingham Reporter, which covered news for Birmingham's Black community from 1906 to 1934.

Adams was an alumnus of Alabama A&M University, where he played trombone in the orchestra led by W. C. Handy. He served as national secretary and treasurer for the A.M.E. Zion Church's extension department.

Adams' son Oscar Jr (b. 1925) was an attorney and the state's first African-American Supreme Court justice. His son Frank (b. 1928) is a noted jazz musician. Adams' papers are archived at the Emory University Libraries and at the W. S. Hoole Special Collections Library at the University of Alabama.

This article is a biography stub. You can help Bhamwiki by expanding it.
Retrieved from "https://www.bhamwiki.com/wiki/index.php?title=Oscar_Adams_Sr&oldid=169521"
Categories: