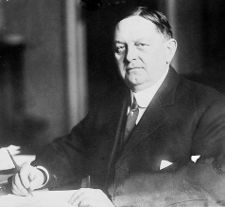 Underwood was born in Louisville, Kentucky and graduated from the Rugby School there before entering the University of Virginia to study law. He was admitted to the bar in 1884 and joined the firm of Garrett & Phelan in Birmingham before being elected to the Fifty-fourth Congress the following year, defeating incumbent Truman H. Aldrich.

Underwood was the first House minority whip from 1900 to 1901. In 1904 he married Bertha Woodward, daughter of Woodward Iron Company president Joseph Woodward.

He was then House majority leader between 1911 and 1915. Finally, he was Senate minority leader from 1920 to 1923. He was a candidate for the Democratic vice presidential nomination in 1912, but refused. He also refused a place on the Supreme Court after the retirement of Justice William R. Day in 1922. He was a Democratic presidential candidate in 1924 and retired from the Senate in 1927.

Underwood opposed Prohibition and was the leader of the anti-Ku Klux Klan forces in the Democratic party in 1924. After leaving Congress the Underwoods resided at the restored "Woodlawn" estate in Alexandria, Virginia. The house had been given to Major Lawrence Lewis by his uncle, George Washington, and later became the first property owned by the National Trust in 1952. Underwood is interred at Elmwood Cemetery in Birmingham.