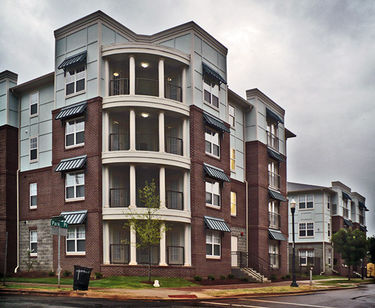 The Veranda at Park Place retirement apartments in 2008

Park Place Apartments is a mixed-income housing development constructed with funding from the U.S. Department of Housing and Urban Development's "Hope VI" program. It occupies the former site of the Metropolitan Gardens public housing project, between 22nd and 26th Street North/Red Mountain Expressway and between 5th and 7th Avenue North in Birmingham's Central City neighborhood.

In the first project of its kind in the Birmingham District, HUD and the Federal Housing Authority provided $49.2 million of $56 million in public funds for the $100+ million overall redevelopment. The federal grants were announced on September 1, 1999 by HUD Secretary Andrew Cuomo. The City of Birmingham provided approximately $7 million in streetscape and infrastructure upgrades. Other funds came from the developers and equity investors. The developer, Metropolitan Garden Developers LLC was created as a joint venture of Integral Properties of Atlanta, Georgia and Birmingham's Sloss Real Estate. They contracted with Williams Blackstock Architects for the design work, and with the Auburn Center for Architecture and Urban Studies to help generate a palette of appropriate architectural treatments for the various housing blocks. Integral and Doster Construction headed the contracting team.

The project replaced the 6-block Metropolitan Gardens project from 1940 with 471 leased units. Plans called for the future addition of owner-occupied townhouses and retail/office development. Architecturally, the project is characterized by traditionally-styled multi-level apartment blocks and townhouses with individual entranceways and porches set on tree-lined streets and surface parking lots in the interior of the blocks. The overall project area also includes Phillips High School, Marconi Park, the YMCA Youth Building, Birmingham Health Care clinic, and the Jones Valley Teaching Farm.

The former public housing project was demolished beginning in 2002. The first tenants of buildings 14 and 15 of the new Park Place community signed leases in November 2004 and the first 197 units filled quickly. When the 198 unit Phase II was completed in December 2006 the rental market was softer and leasing progressed slowly until Fall 2007. The four-story, 76-unit Veranda at Park Place was developed for senior citizens.

The project caused controversy by displacing families from downtown (only 60 of Metropolitan Gardens' 2,500 residents returned to Park Place) and by being slow to provide promised services to residents. The development experienced a high rate of turnover and has had periods with high vacancy rates. On the other hand, Park Place has been credited with reducing crime levels in the downtown area and stimulating redevelopment in surrounding areas.

In August 2010 Cathy Crenshaw hosted a planning charrette with several Loeb Fellows from the Harvard Graduate School of Design. The group identified several priorities for further development, including a neighborhood services center, improvements to Marconi Park to enhance its use by residents, recruitment of retail business to nearby vacant buildings and lots, and some historical interpretation of the role of Phillips High School in the Civil Rights Movement.

As originally proposed, Park Place's 471 units were to be marketed to market rate tenants as well as those receiving public assistance through housing subsidies. Of the 471 apartments, 241 were to be fully-subsidized, 82 were to be partly-subsidized, and 148 were to rent at market rates.

In 2012 the Integral Group reported that the occupancy rate for the 148 market-rate units was 89%, with several additional units pre-leased. Another 82 units with partially-subsidized rents based on income (including 30 units set aside for people with mental disabilities) were 88% occupied, and the 241 fully-subsidized units were fully occupied with more than 400 people on a waiting list.

As of 2017 data from the U.S. Department of Housing and Urban Development indicated that 197 units were offered at below market rate, with 97 of those qualifying as "low-income" apartments.