A. H. Parker High School is a secondary school in Birmingham named after A. H. Parker, a long-time Birmingham educator, and located at 900 4th Street North in the Smithfield Community. The school was first named Negro High School and later became Industrial High School before being named in Parker's honor.

The school first opened as a high school for black children in the fall of 1900 with its freshmen class of 19 students and one teacher, Mr Parker, housed on the second floor of Cameron Elementary School on Southside. Superintendent John Phillips' permission to allow high school classes for African Americans was initially dependent on the project supporting itself financially, so students were required to pay $1.50 per month for tuition.

The school's first graduation was June 3, 1904 at the 16th Street Baptist Church, where 15 students received diplomas. By then Parker had become the school's principal.

In September 1910 the school moved to a new location called the Lane Auditorium and began offering skills for women such as sewing, knitting, and child care. By that time the enrollment was about 100 students. In 1920 the negotiations for the final location for the school were done. In spring of 1923 construction of a new building began. By 1929 the school had an industrial building, a library and a gymnasium.

In 1937 the school had an enrollment of over 2,700. In 1939, Parker retired as principal and the school was subsequently renamed A. H. Parker High School in his honor. 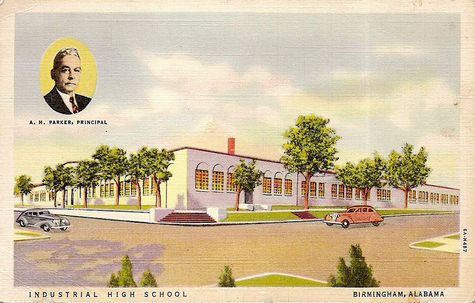 The school continued to grow steadily to 3,761 students in 1946. Because of that large number, the school soon became known as the largest high school for Negroes in the world. In 1953, the school was accredited by the Southern Association of Colleges, an accreditation it has kept ever since.

Construction of a new gymnasium was completed in 2006. In February 2007 the board announced that Parker High School would be one of the schools rebuilt using the city's $331 million share of the $1.1 billion Jefferson County School Construction Fund. The board's plan to spend $35 million on the new school, which would be constructed without its own athletic stadium, has drawn criticism from several alumni who said that the proposed budget was far less than adequate. Plans to demolish the sole remaining historic building on campus, a two-story classroom wing built in 1927 and torn down in 2011, also drew opposition.

Crystal Wadsworth, class of 2007, was the first white student to graduate from Parker.

In February 2009 a group of nine anti-abortion demonstrators from Survivors Campus Life Tours was arrested outside the high school on charges of trespassing.

In 2011, Parker became the home of the city's "Academy of Urban Educators" under Superintendent Craig Witherspoon's plan to establish career academies in the city's high schools. The new school building, designed for 1,200 students, was dedicated on August 10 of that year.

Under the guidelines of the Alabama Accountability Act of 2015 Parker High School was designated as a "failing" school by the Alabama Department of Education in 2016, 2017 and 2018. It did not appear on the 2019 list.